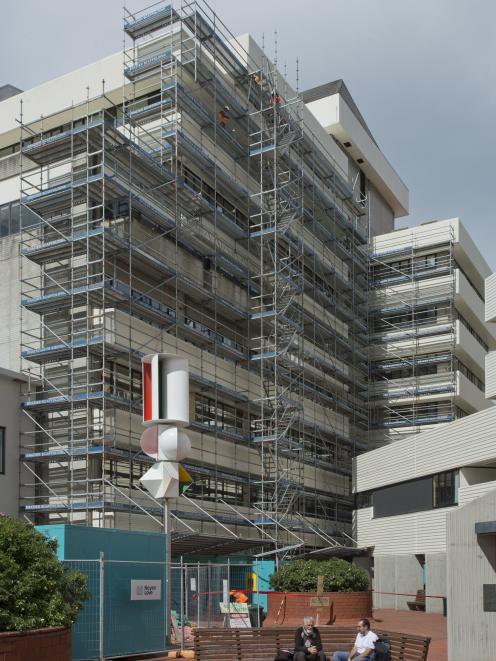 The roofing membranes on several levels of the 40-year-old Dunedin City Council building were due for replacing due to asbestos and age, and now scaffolding covers the Library Plaza face of the council headquarters.

Council property services group manager David Bainbridge-Zafar said the Civic Centre work would be similar in nature to that done on the City Library in 2019.

To lessen disturbance, noisier work would be done before 9am and after 4pm on weekdays, he said.

The repairs were due to be finished by June next year.

The roof replacement work had originally been budgeted for between $2 million and $3 million.

The council was asked to explain the difference between the budgeted costs and the $4.4 million revealed yesterday afternoon, but was not able to reply immediately.

Repairing the exterior of Dunedin’s Municipal Chambers and town hall complex is expected to take several years and work will begin in the middle of this year.

In November, last year, a piece of ornamental Oamaru stone fell from the Municipal Chambers.

The public building complex is one of Dunedin’s most prominent and the city council has noted repairing and preserving its integrity, weathertightness and character as a priority.

Last month, Mr Bainbridge-Zafar said the council was assessing the level and scope of work needed.

It is said that Dunedin is the 5th largest city in the world by geographical area. I truly believe residents and ratepayers would be better served with the DCC at the centre, rather than the civic centre. That would be some 40km or so directly west of the city, in a paddock, within 5km of a rail line, offices housed in repurposed shipping containers stacked 5 high. Using the cycleway for their electric bikes, that way even Aaron wouldn't need to bludge rides, and they can all pay for train tickets instead of driving cars, keeping the Taieri Train running for tourists.
Sell the civic to a developer to create apartment living, that way the housing issue is better addressed using the so-called 'infill' proposition and ratepayers save millions.