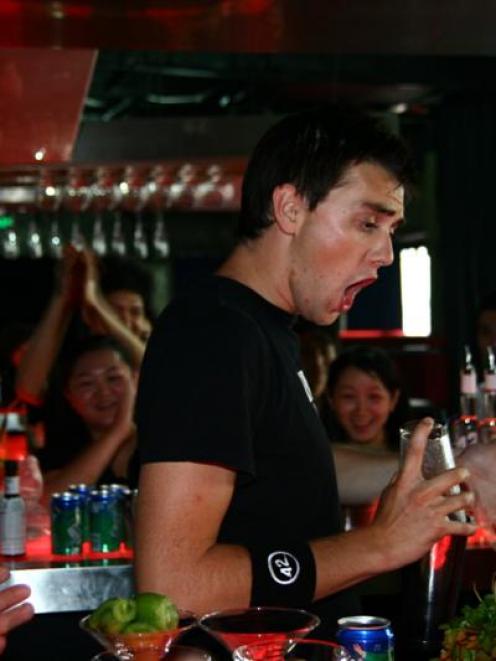 Marty Newell helps create a cocktail culture in China.
A chance encounter with a vodka distributor in Shanghai led to Marty Newell working first in China, then London.

Newell had had a brief association with 42 Below vodka at the Cocktail World Cup in Queenstown a year before, but his permanent job was working behind the bar at Matterhorn restaurant, in Wellington.

In early 2006, he was in Shanghai for a job interview for a new hospitality development and eating in a restaurant when the vodka distributor, a stranger to him, was sitting at an adjacent table.

The man noticed Newell was wearing a 42 Below T-shirt and arranged to meet him that night.

"One thing led to another," Newell recalls, "and four months later, I found myself leaving the Matterhorn, bound for China to start the brand."

The 24-year-old spent two years in Shanghai as brand ambassador for 42 Below, before moving to London six months ago to be the United Kingdom representative.

Newell, who has a political degree, says China is the modern day land of opportunity and living there was rewarding.

"I learned so much about myself, what I am capable of and what can be achieved despite language barriers . . . In China, anything is possible; nothing is easy."

Initially, he learned "bits and pieces" of the language from his New Zealand friends and in his second year, he took lessons - the first time he had tried to learn another language since taking French and Latin at Logan Park High School.

As vodka markets, the UK and China are poles apart, he adds.

In China, the vodka market is in its infancy, with whisky and cognac being the most popular imported spirits.

"However, China is a white spirits market, with 95% of total spirits consumption being their own locally-produced rice whisky called Baijiu - often bottled at 55% to 60% alcohol and largely drunk in Chinese restaurants with dinner."

As brand ambassador, he spent much time teaching people what vodka was, showing them how to mix it in a cocktail and fostering a cocktail culture with bartenders and drinkers.

In contrast, the UK is a mature market, with a highly sophisticated cocktail culture, savvy, brand-conscious drinkers and a plethora of brands wanting to be able to tell the world they have "made it in London".

Newell dislikes the weather and not having his own backyard but says speaking English again is easier and being close to Europe makes travel straightforward.

Ask him his plans and they range from living in South America, to going into space and building a house in the New Zealand countryside.

"I will most certainly be returning to New Zealand but I don't know when . . . Ultimately, I want to be a Kiwi who lives in New Zealand and works in the world."