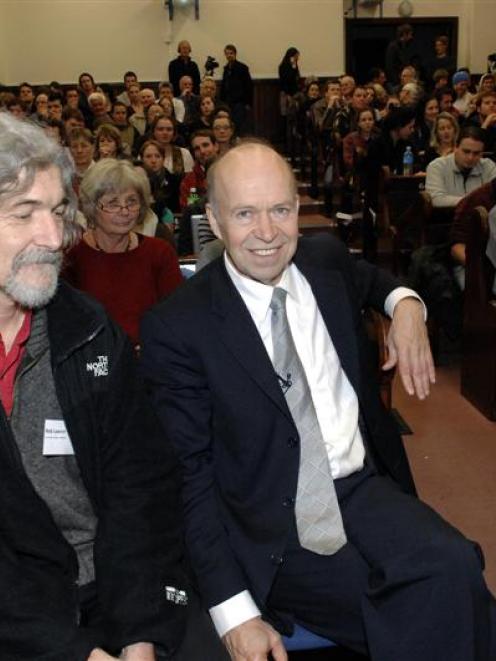 Prof Rob Lawson (left) of the University of Otago marketing department waits with climatologist Dr James Hansen while a technological hitch is repaired before Dr Hansen gave a lecture to about 1000 people at the university last night. Photo by Linda Robertson.
It is fortunate for the world that "the grandfather of climate change", Dr James Hansen, is a stubborn man.

Nearly a quarter of a century ago, he stood in front of the United States Congress and gave a speech which helped bring global warming to the world's attention.

At the time, getting the message across was challenging. Many called the leading climatologist a doom-sayer.

And as time had passed, the challenge had not become any easier, he said.

"It's become easier in the sense that more scientists are coming on board and studying climate change.

"But the opposition from politicians has not been easier. You would think as more scientific information comes along, people would be more accepting.

"But politicians resist the scientific implications because it would have economic impacts on nations.

"We're not doing so well. The resistance from people who want to continue business as usual is strong."

The 70-year-old New Yorker is in New Zealand to deliver a series of public addresses on Human made climate change - A scientific, moral and legal issue, in a bid to keep his message in the public mind.

Dr Hansen has already given the lecture in Auckland, Palmerston North and Wellington, where there had been some opposition to his views.

But on the whole, his lecture at the University of Otago last night was popular, and those there were well educated and respectful.

About 1000 people crammed into five different lecture theatres on campus to hear Dr Hansen. It was one of the largest lectures to be given this year.

Only a minor upset was caused by a temporary breakdown of the video link which broadcast his lecture to four of the theatres.

Dr Hansen said the most extreme opposition to his views happened recently in West Virginia where he tried to give a speech at an open microphone session outside a school.

The school was situated below a pond which contained water which had been used to wash coal from a local mine.

"I was trying to talk about the dangers of the pond to the school and the regional destruction by mining there.

"Some local coal miners came down on motorcycles and sat there revving the engines so no-one could hear what I was saying."

Dr Hansen's answer was to sit outside the school as part of his protest against the mining, until he was arrested by police for his efforts.

His protest action was on the upper end of the scale of actions he has taken to make himself heard. More often, he tried to address the issues that "contrarians" raised, he said.

"I don't expect to change his mind, but I hope to make others realise that what he is saying is not right."