By John Gibb
0 Comments
After Everest, have a rest.

Henley dairy farmer Harjinder Singh Chander took that advice yesterday after a dizzying stint of running up and down Baldwin St to match the equivalent length of the route up Mt Everest.

He started his head-spinning challenge in the world’s steepest street at 5am on Saturday, initially planning to run for the length of a marathon (57 circuits up and down the street), in support of mental health. 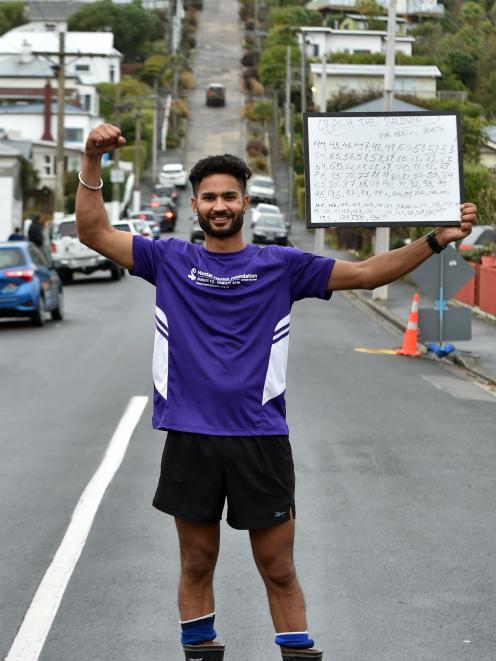 Dairy farmer Harjinder Singh Chander holds a white board recording his success at running up and down Dunedin’s Baldwin St. PHOTO: PETER MCINTOSH
Still feeling good after reaching that goal, he continued the equivalent length of the distance up Mt Everest (134 circuits), tossing in five more circuits, and running the last of them in gumboots.

"I’ve never been that long on my feet," he said.

He kept himself going by eating a few bananas, mandarins and ginger biscuits, the latter from Baldwin St supporters.

"I’m so happy. I was really motivated. It was just like a social run, so many people came in and supported."

Mr Chander aimed to raise awareness of mental health particularly among farmers, who were not good at talking about the subject.

He has already raised more than $2000 towards the Mental Health Foundation of New Zealand and aimed to raise more.

He had planned to run the Everest distance (134 circuits) on Baldwin St in 30 hours, but actually ran 139 circuits in 28 hours and 25 minutes, ending just before 9.30am yesterday.

Christchurch man Andrew Roozen ran a distance equal to the height of Mount Everest (8848m) in about 36 hours in the street in December 2018, and Mr Chander was pleased to beat that mark.

People from Mr Chander’s home town, on the border of India and Nepal, were "not well known for being extreme runners" but he was enjoying such running.

Dunedin ultra-marathon runner Glenn Sutton, who recently ran 580km non-stop from Milford Sound to Mt Cook, showed strong support by running with him several times, including for the initial half-marathon.

Mr Chander is taking success in his stride.

"My legs are not too sore; my body’s just a bit tired," he said.