Climbing stadium so stepdad can smile 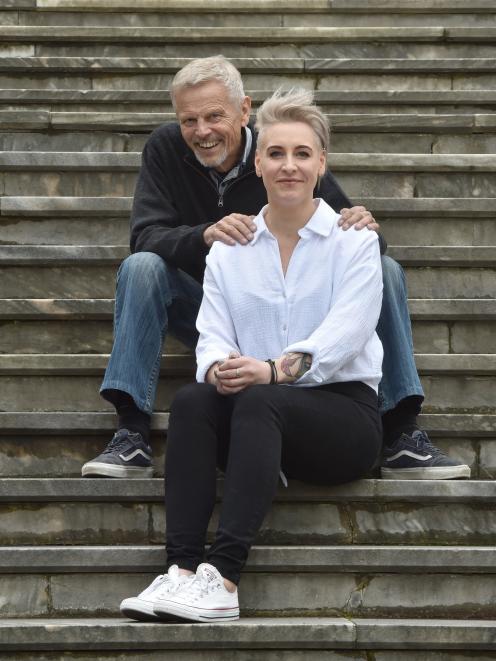 Haley Cron will do the Stadium Climb at Forsyth Barr Stadium on Sunday to support her stepfather Wolfgang Gerber, who has leukaemia. Photo: Gregor Richardson
When Wolfgang Gerber was told he had leukaemia, he was stunned, but stoic.

It was not until the 68-year-old was told his stepdaughter, Haley Cron, was going to do the Stadium Climb to raise funds for Leukaemia and Blood Cancer New Zealand that he became emotional.

''When I heard about that, it actually brought a tear to my eye.

''It was really touching. It makes me feel really special.

''She's got all her workmates involved, she's got T-shirts printed - I'm just blown away, really.''

Miss Cron is doing the climb at Forsyth Barr Stadium with friends and workmates on Sunday in a team affectionately called ''the Wolf Pack''.

''This is something nice that we can do for him,'' she said.

''He's an amazing guy. If you ask anybody that knows him, he is one of the nicest people out there.

''He's constantly smiling, he's happy, he'll do anything for anybody.

''But with the illness, I've definitely noticed a change in him, because he's not able to do any of that.

While she hoped to help raise vital funds for the organisation, her biggest ambition was to raise awareness of leukaemia.

''Every day, six children and adults in New Zealand are diagnosed with a blood cancer like leukaemia, lymphoma and myeloma.

''LBC is the national charity dedicated to supporting patients. And for their families, this support can last months or even years.''

Miss Cron said she had been training at the gym for the challenge, and had been taking the stairs instead of the lift at every available opportunity.

But she believed climbing the 5200 stairs at the stadium would still be a major challenge.

Mr Gerber said he was having his first round of chemotherapy this week, so he would be supporting the Wolf Pack from a seat in the stadium.

He has not been given a prognosis yet, but he remains confident about beating the illness.

''People can live with early stage leukaemia for years and I hope to be one of them.''