An arduous 1300km biking campaign to Parliament undertaken by a Dunedin couple came to an end yesterday, but was stopped by security in the last 20m.

Parents Julian and Camilla Cox cycled from Dunedin to Wellington, towing a coffin behind their tandem bike, in a protest calling for Government drug-buying agency Pharmac’s yearly $1 billion budget to be doubled.

Their journey was inspired by their daughter Rachael (19), who has cystic fibrosis and who under Pharmac’s funding cannot access life-prolonging drugs available in other countries.

Yesterday, they finished their 21-day journey, delivering the coffin to the front of Parliament — however were stopped by security staff who said the pair did not have permission to go to the steps. 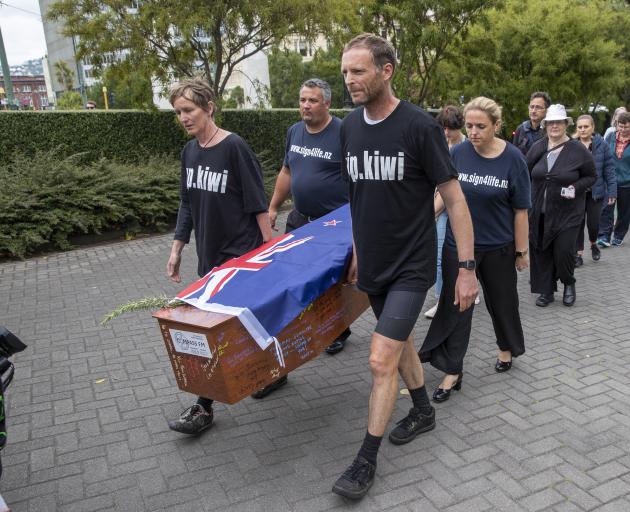 Camilla and Julian Cox and members of action group Patient Voice Aotearoa carry a coffin towards Parliament during their protest over Pharmac’s budget. Photo: The New Zealand Herald
‘‘We were told by security we were not allowed to go the extra 20m on to the steps of Parliament.

‘‘We put it down and had some speeches and things, but again when we tried to leave we were told we were not allowed to leave until the coffin had been delivered to a member of Parliament, of which there were none around.

The delivery of the coffin was meaningful, aside from the exchange with security, he said.

‘‘It was a bit pathetic, but ultimately it’s about the big battle we’re fighting rather than the little ones.’’

Mr Cox said the pair felt happy to have reached their destination and were looking forward to laying low for a bit.

During the trip, they faced headwinds and colder-than-normal temperatures, but were touched by the warmth and support they received.

‘‘We’ve been humbled by people’s kindness and generosity, with offers of free camping and beds for the night, free coffee and meals, with dozens more sharing personal stories about their own health struggles in having to go without medications.

‘‘We heard story after story from people fundraising or mortgaging a home to get what they need - they deserve better.’’

Mr Cox said the petition behind the journey would run for the next month.

‘‘We would appreciate people continuing to sign the petition and spread the word.’’

The pair would not stop the fight over Pharmac funding until their daughter had the drugs she needed, they said.

‘‘While our daughter’s not getting access to the medication she needs, how can we stop fighting?’’

The pair travelled to Dunedin today and were looking forward to seeing their three daughters.