College chefs show they are masters of craft 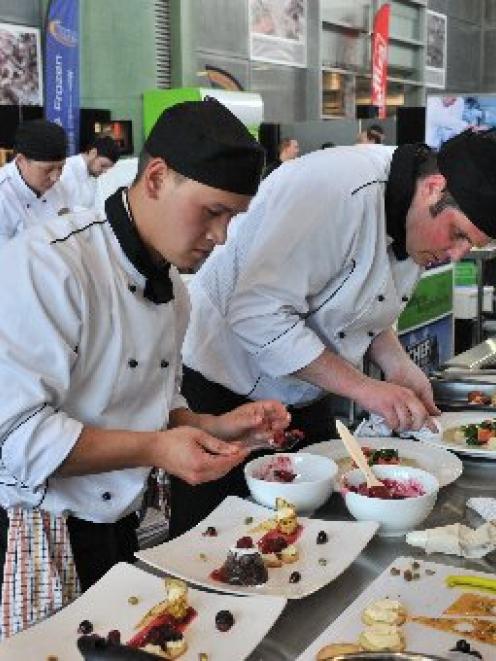 Cumberland College chefs Dylan Henry (left) and Brian King put the finishing touches to their two dishes, for which they won third place in the 2013 Residential College Chef of the Year competition at the University of Otago last night. Photo by Linda Robertson.
They make 2.5 million meals a year, and last night Dunedin's residential college chefs proved they know how to put together a plate.

Abbey College took top honours against eight other teams in the 2013 Residential College Chef of the Year competition, held in the link building at the University of Otago.

Their only compulsory ingredient was a can of cola, which came in a mystery box alongside rabbit, crayfish and scallops.

Mr Kennard braised rabbit in the soft drink and paired it with Peking duck pancakes, a salad and chilli caramel sauce.

The duo have entered all four annual competitions, placing second in the first year (2010) and third last year.

Judge Tony Heptinstall, head of hospitality at Otago Polytechnic, said the Abbey chefs' two dishes complemented one another, but ultimately the competition was very close between the top three placings.

Seven points out of 100 separated the top teams, who were also judged by Helen Mason, of Two Chefs, and Shane Gibson, of Southern Hospitality, which was the event's main sponsor.

Competition organiser and college catering manager Gary McNeill said more teams were entering the event each year. There were 14 residential colleges in Dunedin and each of them was invited to enter up to two teams, he said.

''They produce 2.5 million meals a year and this competition highlights their roles.

"It puts them out of their comfort zones and shows us what they are really capable of, because in the colleges they are restricted by what they can produce in high numbers within a budget.''