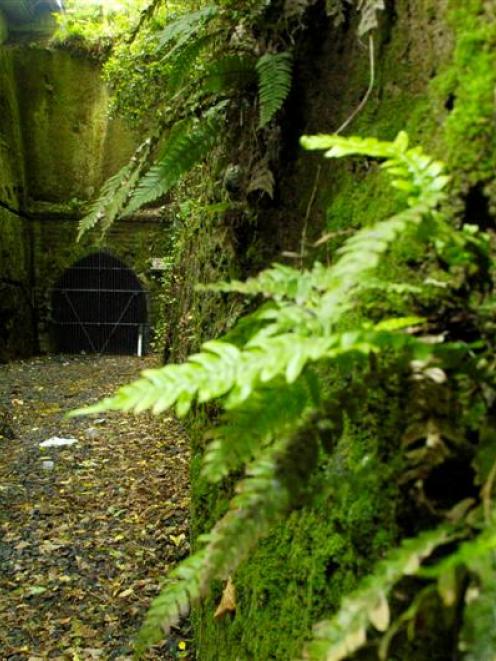 The former Caversham railway tunnel. Photo by Gerard O'Brien.
The Dunedin City Council has committed to reopening the Caversham tunnel to cyclists and pedestrians, and will spend $100,000 on tunnel safety work in the next year, despite a blunt warning about the dangers inside.

Councillors at annual plan deliberations yesterday approved the extra funding for the 2011-12 financial year - on top of the $30,000 already budgeted for a geotechnical report - after arguments from Cr Kate Wilson and others.

That was despite council water and waste services manager John Mackie warning of the dangers posed by methane and hydrogen sulphide gases that could escape from a gravity sewer running through the tunnel.

Cr Wilson yesterday called for the council to commit to reopening the tunnel, and help pay to make it safe for the public, after calls from cycling groups and others over several years for public access to be restored.

Those included the Dunedin Tunnels Trail Trust, which made a submission to the annual plan hearings last week.

The tunnel was given to the city in the 1960s and used by cyclists and pedestrians, until it was closed by the council in 2006 because of safety concerns associated with the pipes running through it.

Cr Wilson argued, if the council's pipes had made it dangerous, the council should pay to fix the problem, and the trust should be supported by a commitment from councillors to reopen the tunnel.

That would allow the trust to begin community fundraising for the tunnel and a proposed southern cycleway, which would rely heavily on the council's backing, she said.

However, Mr Mackie warned the tunnel could pose a risk to anyone entering it, and making it safe would come at a cost.

The threat posed by gases escaping from the council's sewer and accumulating inside the tunnel was highlighted by fatal accidents overseas, he said.

In the United States, three workers died in a 1988 methane gas explosion inside a sewer in Milwaukee, and three more died from hydrogen sulphide inhalation while repairing a ship's broken waste line at the City of Los Angeles port in 2005, he said.

At present, anyone entering the Caversham tunnel required accreditation, training and safety equipment, as well as risk management and escape plans, he said.

The tunnel would have to be made safe, including adding atmospheric monitoring equipment normally found in mines, before public access could be restored, he said.

Council city environment general manager Tony Avery said the concern was the council was "potentially liable" if an accident occurred once a hazard had been identified.

Staff estimated it could cost up to $507,000 to cover underground cables with an extra 50cm of gravel and ensure they were safe, or $3.8 million to build a new trench for council pipes and other infrastructure, councillors heard.

Cr Wilson doubted the $507,000 estimate, but argued Mr Mackie's department could use annual savings of $200,000 found within the council water and waste services budget to offset the cost.

Councillors eventually voted to add $100,000 to the 2011-12 budget to fund the start of work to reopen the tunnel, which could include some safety improvements. Any further council funding was to be considered for the 2012-13 year.

The tunnel commitment was subject to a feasibility study, costs, budget constraints and public funding.