Concerns about supply of carers 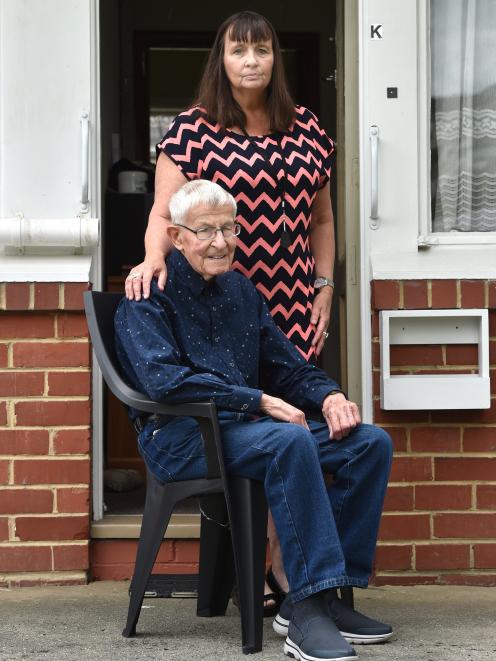 Kevin McConnachie and daughter Tracey Coll are worried about whether he will receive in-home care over the Christmas period after several missed appointments from Healthcare New Zealand support workers. PHOTO: GREGOR RICHARDSON
"What will it take — for one of your clients to be lying dead on the floor on Monday morning when your carer comes in?"

That is the question Dunedin woman Tracey Coll has for Healthcare New Zealand after ongoing issues with its carers not showing up for daily care appointments with her 85-year-old father.

Kevin McConnachie requires visits from carers every morning and evening to put on compression stockings, among other tasks.

Mrs Coll said in the 18 months her father had required care, there had been regular problems with carers not showing up to appointments, and without a phone call to let him know.

Over the past week alone, four appointments had been missed.

Mr McConnachie said it was frustrating when a carer did not show up, and he would often be waiting at home for hours, making it difficult to make other plans.

"It doesn’t take much to let someone know that they’re not coming."

He was seriously concerned about what his care would look like over the Christmas period as his daughter was planning to go on holiday on Boxing Day.

"There’s a fair bit of this that goes on, which I think is not necessary. It’s just poor management on somebody’s part."

Mrs Coll said her father had her to back him up, but she worried about the quality of care received by people without family or friends to advocate for their needs.

She also had concerns about training of carers sent around at short notice.

The grade of compression stocking Mr McConnachie used was very tight, and often carers were not trained in how to comfortably help him put it on.

In Mr McConnachie’s case, she said they could confirm three missed appointments since November 1 when no replacement carer had been able to be found.

"We also regret that we have fallen short of our organisation’s expected procedure to keep the client or the next of kin informed."

Permanent staff members had been rostered on all of his shifts across the holiday period apart from one morning shift, with work ongoing to fill it.

A client’s individual needs needed to be matched with a suitable caregiver, which added pressure when finding a suitable replacement, she said.

Healthcare NZ was committed ensuring its clients received support that met their needs and expectations.