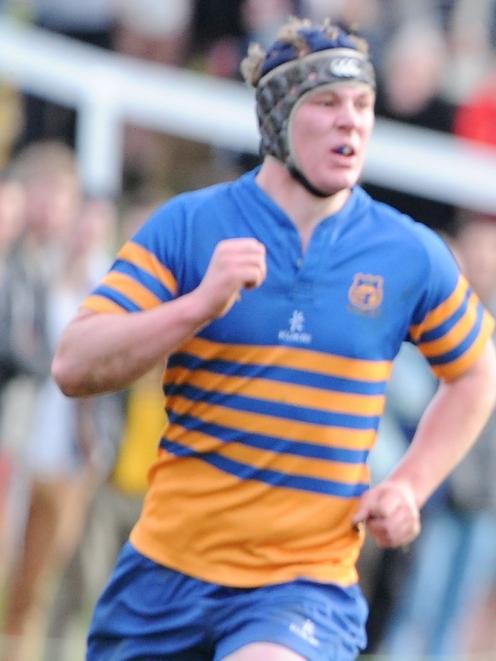 Riley McDowall plays for Taieri in the colts rugby final at the University Oval in August. Photo by Craig Baxter.
The case of a young Dunedin rugby player who avoided a criminal conviction after breaking a man's jaw in a street attack has again raised concerns that sportspeople in New Zealand have a "get out of jail free card".

Rising rep rugby star Riley Tane McDowall, 19, was walking down a Dunedin street in the early hours of May 11 this year extolling the successes of his rugby club when the assault occurred.

The victim, according to police, made disparaging remarks about McDowall's Taieri Rugby Football Club, which boasts former All Blacks Arran Pene and John Timu as old boys.

Otago under-19 player McDowall saw red and immediately punched the man in his mouth.

The victim suffered a fractured jaw, cuts, and lost a tooth.

But this week at Dunedin District Court, a judge took pity on the former Otago Boys' High School flanker.

Judge Kevin Phillips said a conviction would end any possibility of a professional rugby career for amateur colts player McDowall.

Instead, he granted a discharge without conviction and ordered him to pay $3000 in emotional harm reparation.

Judge Phillips reminded McDowall that alcohol was known to have ruined the careers of international cricketers and rugby players.

Ahead of sentencing, a remorseful McDowall had sworn off the booze, completed 100 hours of voluntary community work, and offered to pay reparation to his victim.

But Dr Hodge warned that there should not be separate laws for sportspeople. "If this was an apprentice welder or potential builder, I would hope the judge would've gone about it the same way," he said.

"There should not be a get out of jail free card because you're a present or future potential sportsman."

Dr Chris Gallavin, dean of law at University of Canterbury, said sportspeople are the "bread and butter for applications to discharge" in New Zealand.

Judges must weigh up whether the actual penalty will far outweigh the gravity of the case, he said.

"That will always lend itself to people who are in special positions - whether they are sportsmen and women, Maori king's sons, or people in positions of special responsibility," said Dr Gallavin.

"Builders or plumbers are unlikely to lose their job or be in a position of never being able to be builders or plumbers ever again over something like this. Whereas, with a sportsman or woman, a conviction could destroy their career."

A spokesman at the Dunedin Police district prosecutions office yesterday said he would assess whether an appeal would be mounted.

John Freeland, senior president of Taieri Rugby Football Club, where McDowall plays for its premier colts side, said the incident should be a lesson for all young people.

"It doesn't matter what career or code they follow, if they put themselves in the eyes of the law, they all should face the risk of not being able to travel overseas or follow their professional aspirations," he said.

But given that McDowall had made the under-19 representative team, which placed fifth at this year's national tournament, meant he was "obviously not a bad player".

* In 2012, an ex-All Black had a conviction of assaulting his son overturned on appeal, with a High Court judge ruling he was at risk of losing employment from speaking engagements oversees.

* Last year, Blues player Francis Saili was been discharged without conviction for driving while his licence was suspended. Blues coach John Kirwan told the court a criminal record could affect his future selection.

Saili was disqualified from driving for six months and ordered to pay $1000 to a road safety charity.

* Polocrosse player Casey Anne Mullany was last year originally granted name suppression and discharged without conviction after being convicted of drink-driving on the basis it could impede her ability to compete overseas. The decision was overturned on appeal.

* In June, international freestyle snowboarder Ben James Stewart, 21, escaped conviction for cannabis offences, with a judge saying he hoped he goes on to "realise your potential".

* Basketballer Jordina Katu failed in her attempt to avoid a drink-driving conviction in January after a judge found there was no guarantee of her selection to travel overseas with the Tall Ferns.

* The son of the Maori King, Korotangi Te Hokinga Mai Douglas Paki, 19, was originally discharged without conviction in the Auckland District Court on charges of burglary, theft and drink-driving. The ruling was overturned earlier this month, after the Crown was successful in its High Court appeal.

* Air New Zealand pilot George Robert Meyer, 32, was caught riding a scooter without a helmet and more than two and a half times the alcohol limit. avoided conviction after a judge said a drink-driving conviction would stop Aucklander working as a long-haul pilot and granted his application for a discharge to maintain a clean record.