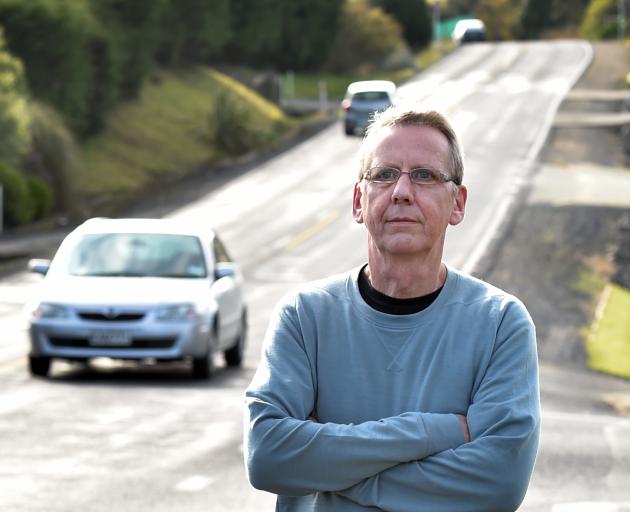 Paul Gouverneur, of Waldronville, Dunedin, said the traffic on Brighton Rd had resembled that of a normal week, pre-Level 4 restrictions, and believed people were undertaking non-essential travel. PHOTO: PETER MCINTOSH
Paul Gouverneur, of Waldronville, was surprised to see an unusually large number of vehicles on the road during a nationwide lockdown.

He said Monday’s traffic resembled that of a normal Dunedin workday and believed there needed to be further traffic stops in the area.

Mr Gouverneur had been monitoring the traffic from

his balcony, which overlooked Brighton Rd, for

“something to do” under the stay-at-home restrictions.

A constant stream of vehicles and the buzz of engines had not seemed to slow down since the move into Alert Level 4 last week.

He said while he understood it would be a difficult time for people, he had been “frustrated” many had not been adhering to the stay-at-home message.

“It should not take lots of people dying for people to take this seriously.”

Southern district police have repeatedly urged people to use their vehicles only to access essential services, including grocery shopping, the bank and pharmacy, or to go to their essential service jobs.

Travelling in a vehicle to exercise somewhere was not allowed under lockdown restrictions, police said in a Facebook post.

Police would continue to monitor movements of those outside their homes and ask them where and why they were travelling.

I agree with Paul, we also live in the Waldronville area and have been amazed when going for our lunchtime walk just how much traffic there is. Surely they can't all be going to get essential items.

A flyer delivered to homes from the government has a section which states that it is possible for different areas of the country to be at different levels of alert at the same time. Some places are on alert level 4 regardless of whether they need to be or not needing to be.

Or perhaps that is a reflection of that fact that if you live in Waldronville or further south down the coast to access essential services or as as essential worker to get to work you need to drive into the city or at least Green Island. There are no supermarkets, doctors or pharmacies along the south coast that I am aware of.

"Mr Gouverneur had been monitoring the traffic from

his balcony, which overlooked Brighton Rd, for

“something to do” under the stay-at-home restrictions", sounds like this guy needs to find something else to do, how does he know those people traveling are doing so unnecessarily?, not everyone has the luxury of sitting at home like he does.

Because everything unnecessary is closed.

So Gouverneur is the official enforcer of the lockdown for Waldronville? Who appointed him? What makes him think that people aren't taking the lockdown seriously? People living along Brighton road from Waldronville all the way down to Taieri Mouth have only 1 way to get to Green Island for food...and that's via Brighton Road. Guess what? They only have 1 way to get home...via Brighton Road. I traveled on Brighton Road yesterday from Brighton to Green Island to get a flu shot. The traffic was significantly lighter than what it normally is. Like many people in Dunedin, I don't need somebody like Gouverneur lecturing me about taking the lockdown seriously. Worry about yourself mate. And as long as we are lecturing, I don't think travelling from your house down to Brighton road to get your picture taken for the ODT would be deemed essential! Do you? Why not practice what you preach before you start lecturing people about what is essential travel and what isn't!

Sounds like Mr Gouverneur should take up knitting as a hobby...
If it bothers him so much, simple answer, don't stand at the side of the road..

Yes I agree. I am an essentail worker and am often driving around multiple areas of Dunedin for my work. I am seeing many people on the roads with multiple people in them rather than just a designated shopper. Also seeing lots of people at playgrounds, the beach, surfing etc. Its disappointing as these few people are going to ruin it for the masses by making this lockdown stretch longer than needed, and/or more restrictions being put on us (curfew, no walking/biking etc). If you need to go to the doctor/pharmacy/supermarket, remember its ONE PERSON if possible (obviously solo parents and carers etc cannot do this), it is not an excuse for a joy ride or to get out of the house. And for the numerous surfers I saw at Blackhead yesterday, I'm sure you don't live there!! If you need to drive somewhere for recreation, IT IS NOT LOCAL!! I have a friend who works for coastguard and the last thing they want to break isolation for is to search for a missing surfer and endanger themselves and their familites. Use your noggin people!!!!

Once again, close off road access to beaches etc. I went past John Wilson Ocean Drive today for work and there were a number of cars coming in and out of that area. They simply shouldn't have been, there is nothing 'essential' up there.

I have a better title for this article.....
Local Man Has Too Much Spare Time On His Hands.

Wouldn't want to live in that neighborhood! Probably knows everybody's personal business too. Who contacts the newspaper to highlight themself as nosy busybody? Needs to worry about his own business and stay out of everyone else's.