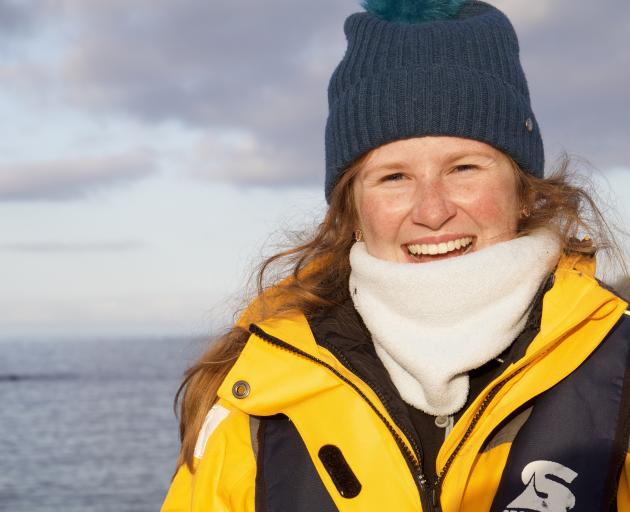 Composer, lawyer and 2015 ODT Class Act recipient Ihlara McIndoe is holding a concert on May 12, of her compositions inspired by a visit to the Antarctic in 2020. PHOTO: SUPPLIED
Bone-chilling winds, cracking icebergs, crashing waves and the squawks and roars of Antarctic wildlife are sounds not traditionally heard during classical concerts.

It will be one of the enticing features of composer Ihlara McIndoe’s upcoming concert on May 12 that will make listeners want to wear coats indoors and turn up the heating.

The Dunedin-born and educated composer, and Otago Daily Times Class Act award winner, was selected as an inspiring explorer with the Antarctic Heritage Trust in 2020, and travelled to the Antarctic to collect audio recordings which have inspired the compositions in the concert.

Miss McIndoe (24) kayaked around the Antarctic Peninsula collecting sound samples of the ice, wind, water and wildlife, and they have been woven into some of her music along with an accompanying audio visual display of the frozen continent by film-maker and photographer Anthony Powell.

She said the experience gave her a new appreciation of how music and exploration could combine to inspire people.

"The whole experience was completely moving.

"I was fuelled by conversations we had during our travels and the sense of how small humans are, yet how massive our impact can have on this earth," she said.

"I really wanted that to resonate in these compositions, and for those listening to really get a sense of what it’s like to be in Antarctica, while encouraging people to reflect on preservation and exploration of our natural world."

The concert, titled A Musical Journey to Antarctica — will feature five of her compositions, performed by University of Canterbury and the New Zealand School of Music musicians, and will be broadcast worldwide online.

Miss McIndoe completed her bachelor of music degree at the University of Otago, alongside a bachelor of law and bachelor of arts (Hon) in 2019, and when she is not working on her manuscripts, she is a practising lawyer in Wellington.

While the two professions may seem like chalk and cheese, she believed they were remarkably connected.

"I love understanding the relationship between humans and our planet, which leans into the intersections of art, law and policy.

"For me, I believe that art is a form of advocacy.

"I am hoping through this art, listeners can be inspired to learn more about the impact we can have on our natural world."