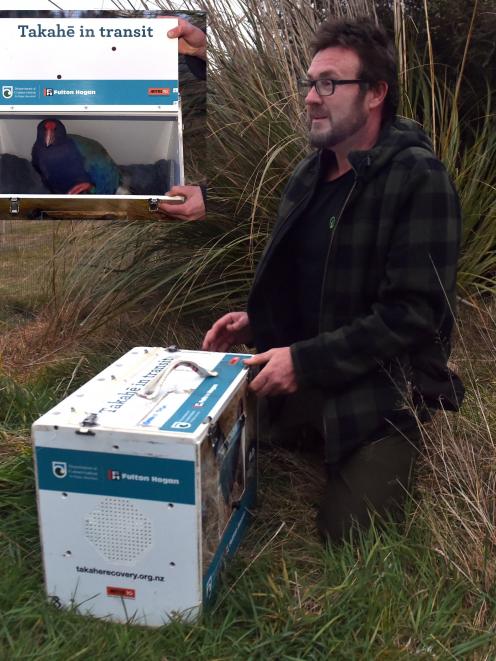 Orokonui Ecosanctuary conservation manager Elton Smith releases a new male takahe called Bennett on Thursday, which the facility hopes will mate with a female called Waimarie (inset), also released on Thursday. PHOTOS: PETER MCINTOSH
Love is in the air at the Orokonui Ecosanctuary, with arrival of two new takahe which are expected to bring the patter of tiny feet.

A male bird named Bennett and a female named Waimarie were released into their new home on Thursday — in time for the sanctuary’s reopening.

Orokonui conservation manager Elton Smith made the nearly seven-hour round trip to the Burwood Takahe Centre, in Te Anau, to pick them up.

The takahe were welcomed to Orokonui by a small group of excited staff members, who watched as Mr Smith and trainee ranger Temuera Flavell released them into their new ‘‘love pen’’.

Mr Smith said the arrival of the birds was ‘‘remarkable’’ timing for the sanctuary and its visitors, who would be allowed to return at the weekend.

‘‘It means more life here ... it is restoring and enhancing life ... which is a positive step in the recovery of takahe.’’

The Department of Conservation lists the takahe as ‘‘nationally vulnerable’’, meaning it faces a risk of extinction in the medium term.

Bennett and Waimarie’s genetics gave the team confidence they would hear the ‘‘pitter-patter’’ of takahe chicks’ feet, possibly within the year.

Orokonui depended on its cafe and guided tours for much of its income; without international tourists, it would rely on locals visiting, general manager Amanda Symon said.

It was lucky to have some support from community groups.

The sanctuary will reopen three days a week, from Saturday to Monday, 9am to 4.30pm.

Congrats and please don't leave them out in the rain during a extreme rainfall like two of the sanctury's earlier takahe chick successes were. Have respect that they are not in their most natural environment.