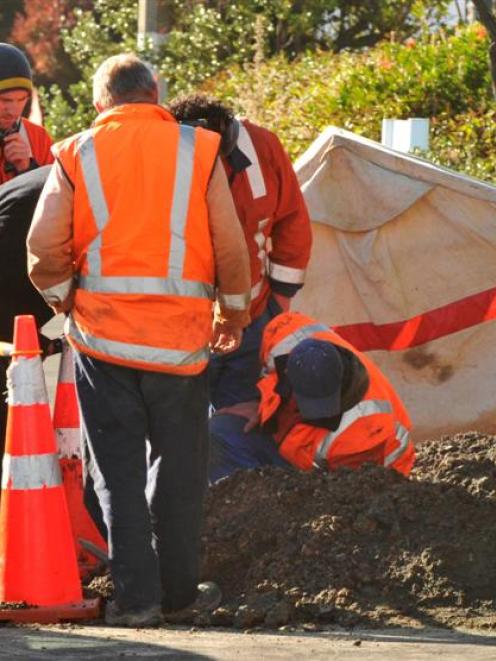 The contractor, who was working for Downer EDI Works on behalf of Chorus, received the shock after striking a cable about 11.30am while working on connecting a lead into a building in Strathallan St.

He escaped relatively unscathed but was taken by ambulance to hospital, where he was kept under observation overnight.

A spokesman for the Aurora Energy network said the incident caused a power outage to 76 consumers in the immediate area. The fault was located quickly and power restored in just over 10 minutes.

The incident comes after contractors working for Chorus were earlier responsible for two power outages - one on April 30 and another on May 14 - after striking high-voltage underground cables while installing fibreoptic cable under Dunedin's streets.

After those two incidents, Chorus general manager of network build Chris Dyhrberg apologised for the disruption, saying: "We need to do better".

Asked if it was concerning there had been a third incident in a little over a month, Chorus spokesman Robin Kelly said it was a "separate incident" from the previous two power outages, which were related to broadband installation.

"Before we jump to any conclusions about what's occurred we want to take the time to make sure our technician is fine and healthy and ... complete a full health and safety investigation," he said.

The company was committed to the safety of its contractors and would be carrying out an investigation involving the Department of Labour, he said.

"At the end of the day, these are the people that work on behalf of Chorus and we want to make sure that they follow the right procedures and take the right precautions and make sure they aren't put at risk."

Constable Hugh Tait, who was called to the scene along with the Fire Service, said the contractor appeared relatively unscathed by the shock and was "up and about" when he was picked up by ambulance.

A spokesman for Aurora Energy Ltd said it was also investigating the incident, but it was too early to comment.