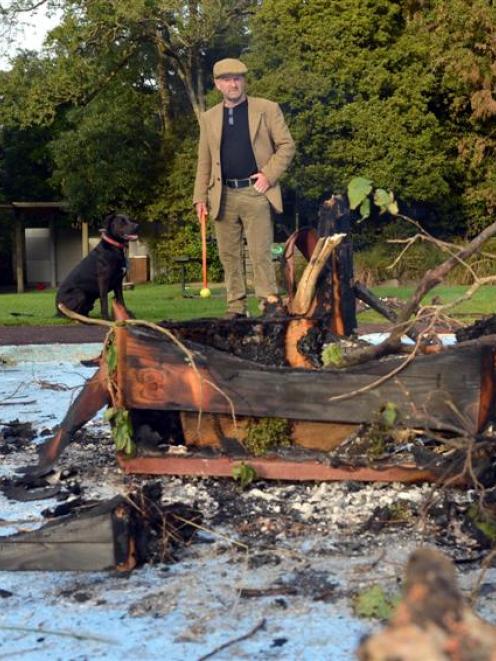 Woodhaugh resident Jeff Dickie inspects the damage to the toddler's pool after a party yesterday. Photo by Stephen Jaquiery.
Jeff Dickie has had a gutsful.

Walking through Woodhaugh Gardens with his daughter on their way to school, he was appalled to discover the still smouldering remains of a couch fire in the empty toddlers' pool.

Native wood was piled on top of the charred remains and the area was littered with crushed alcohol cans, shards of glassand discarded clothing.

''People have clearly been partying up.''

His 10-year-old daughter, who had used the public amenity all her life, was shocked to see it treated in such a manner.

Mr Dickie had a message for those party-goers - ''they should leave Dunedin until they've grown up enough to behave like normal people''.

A recent fire in the pool resulted in the surface being patched.

Mr Dickie was so incensed by the latest incident he contacted the University of Otago vice-chancellor Harlene Hayne to ask her to assess the damage, but was told she was not in a position to do so.

While the Woodhaugh resident conceded he did not know if the offenders were students, ''all of this behaviour absolutely stops when the students go home''.

Last month, Mr Dickie was involved in removing up to 40 St Patrick's Day revellers from his neighbour's Malvern St property, after a large party in the area.

He said the university needed to address ''these important issues of mass poor behaviour''.

Council contractors were called to the site to clean up the mess.