Council apologises to family over dog 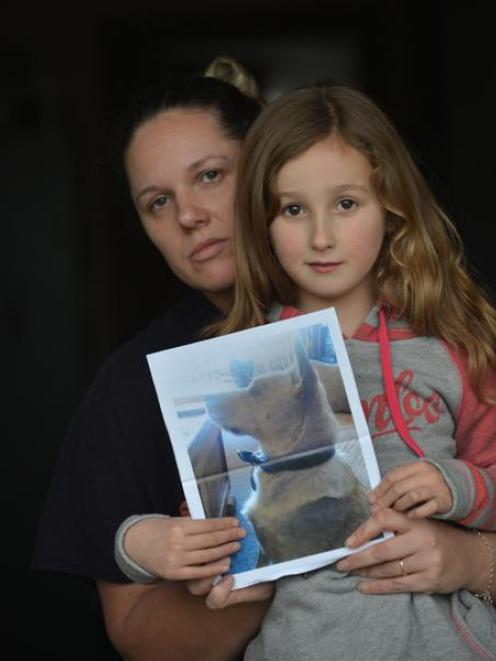 Kimberly and Maia Allen (5), of Dunedin, hold a picture of their dead dog Obi. Photo by Peter McIntosh.
A Dunedin family has received an apology from the Dunedin City Council after it euthanised the family's beloved pet dog.

As a result of the incident, the council is also to review its procedures in relation to destroying dogs.

Kimberly Allan and her family were devastated when the council destroyed 2-year-old Labrador-cross Obi last week, seven days to the day after the dog was impounded when found wandering from its Andersons Bay home.

The council said it was following legislative requirements of owners having seven days to claim their dog from the pound.

After receiving a note in her mailbox the day after the dog was picked up, Ms Allan called the council and agreed on a plan to pay the associated fine.

She went to council offices to pay it on the seventh day, only to find the dog had been destroyed several hours earlier.

She, her partner and her young daughter were heartbroken.

After she contacted the council, staff had tried to reach her at home and on her cellphone. However, her landline was down and she said she had not received the cellphone call.

She believed the council had not tried hard enough to make contact with her and wanted owners to be more clearly warned of plans to kill their pets.

Yesterday, council regulatory services group manager Kevin Thompson and environmental health and animal control team leader Ros MacGill met Ms Allan and her partner and apologised for not making more of an effort to contact them before Obi was euthanised.

Mr Thompson said the council had reached a confidential agreement with the pair, but it would review procedures in relation to the impounding and disposal of dogs.

That meant not sticking so rigidly to the seven-day time frame.

Ms Allan said she was ''very happy'' with the council's response and appreciated the visit.

It had done everything her family had asked, she said.

''We accept our side of the blame, that Obi was out and shouldn't have been, but it's a big ups to them for doing it, even though Obi's not here, but I'd hate for that to happen to anyone else.''