Council contract back to gang leader 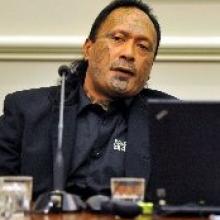 The Dunedin City Council has recommenced its contract with a Black Power leader facing dangerous driving and drugs-related charges.

The council suspended its $52,500 contract, involving weed and litter control and path maintenance, with Albert Epere (49) in December, after learning he was facing charges for allegedly racing on State Highway 1 north of Dunedin.

However, it became apparent the contract had been reinstated when Epere appeared in the Dunedin District Court yesterday to apply to vary one of his bail conditions so he could drive for the purposes of carrying out work for the council.

As a condition of his bail, he is not allowed to drive.

Council parks, recreation and aquatics group manager Richard Saunders confirmed to the Otago Daily Times it had reinstated its contract with Epere's Mauri Kohatu Trust after an investigation.

‘‘We commenced the contract again at the start of this week, subject to the trust being able to undertake the work that they are required to do in that contract,'' Mr Saunders said.

Asked what he would say to members of the public who believed Epere had blown his opportunity, Mr Saunders said: ‘‘Our position on that is until there is an outcome to [the court process] it is not appropriate for us to draw that conclusion.''

‘‘As things develop with those cases, we will look very carefully at ... how appropriate it is for us to remain in that contract.''

Counsel Sarah Saunderson-Warner earlier told the court Epere was responsible for maintaining parks and gardens around the Dunedin area as part of the council's contract with the Mauri Kohatu Trust. The vehicle involved in the offending was registered to the trust.

Judge Kevin Phillips agreed to vary the bail condition so Epere could drive the specific vehicle only for work purposes, between 7.30am and 6pm, Monday to Friday. He refused to extend it to Saturdays to allow Epere to deal with a backlog of work which built up while the contract was suspended.

Epere, a labourer, denies the three charges and has been remanded to March 10 for a case review hearing.