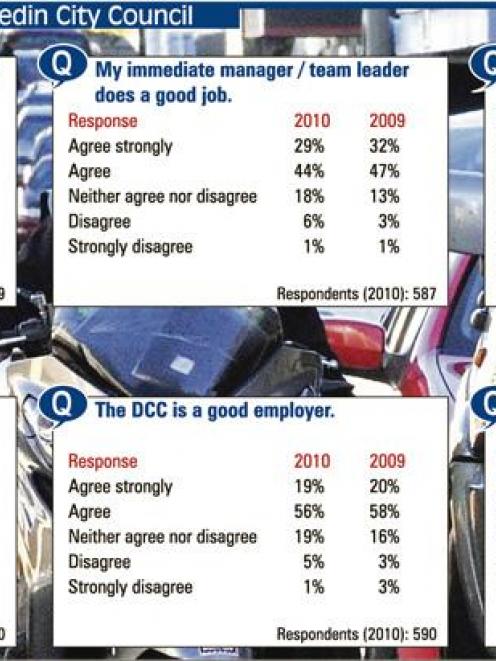 Dunedin City Council chief executive Jim Harland says the council remains a happy workplace, despite more than one-quarter of employees opting not to express pride in working for the organisation in an internal survey.

The 2010 staff satisfaction report offered council employees the chance to rank their work experience by responding to 23 statements, using a five-point scale ranging from "agree strongly" to "strongly disagree".

The survey attracted 591 responses this year, and showed overall levels of satisfaction had remained high and relatively stable since 2003, albeit with small declines in 20 of the 23 areas assessed since last year.

That was despite increasingly vocal public criticism directed at some elements of the council's performance in recent years.

However, 29% of 589 staff were this year not prepared to agree or strongly agree with the statement "I am proud to work for the Dunedin City Council" - an increase from 24% the previous year.

Instead, 23% of respondents, amounting to 136 staff, opted to sit on the fence by neither agreeing nor disagreeing - a 4% increase from 19% last year.

Another 5% disagreed with the statement, up 1% from last year, while the number strongly disagreeing remained at just 1%.

Mr Harland told the Otago Daily Times he was "pretty happy" with the long-term results since 2003, and the "positive spin" on this year's figures was that 75% of staff were proud to work for the council.

The fence-sitters could not be counted as negative about their council work experience, and would likely be positive if forced to decide, Mr Harland believed, citing other surveys without a neutral position.

Only 33 staff across the organisation had indicated they were not proud to work for the council.

"There's always going to be some people that are not happy in every organisation.

"We've had a pretty steady and high level of satisfaction for a long period of time.

The summary of results was released to the ODT last week, after a request under the Local Government Official Information and Meetings Act 1987 last month.

Mr Harland refused to release a breakdown of survey findings by department, saying he was not prepared to expose managers with dissatisfied staff to "possible undue pressure and harassment".

Mr Harland told the ODT "a couple" of departments and managers were causing concern, and work to improve their results was "ongoing".

"But there aren't many, and I think that's important."

Individual comments by staff about managers were also withheld, as they were made on the understanding they were confidential, he said.

That confidentiality had helped lift survey response rates from a low of about 42% in 2005 to 83% this year.

Other results found satisfaction levels remained high among staff for enjoyment of their work, their motivation to "go the extra mile", the performance of staff members' immediate managers or team leaders, and overall job satisfaction since 2003.

• DCC staff asked to respond to 23 statements about the council.

• Responses used to identify areas of improvement for departments/managers.