Council must support vulnerable, too: Calvert 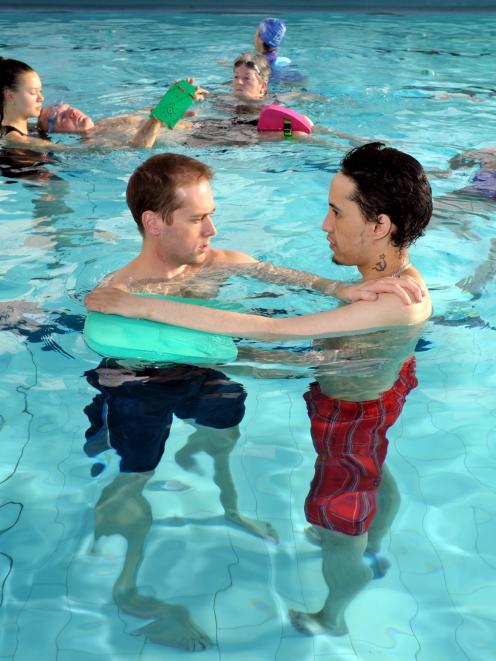 Physiotherapist Mark Shirley (left) helps client Christopher Matahaere in the physio pool, while physiotherapy student Jess Chicksen supports paraplegic Jim Duncan, who was swimming with his wife, Sue Duncan. Another physio client, Judy Oats, is on the right. Photo by Gregor Richardson
Small-spending stalwart Cr Hilary Calvert has emerged an unlikely champion of the Dunedin City Council stepping in to save the city's physio pool.

Council staff are preparing a report on the pool for the next community and environment committee in September. It is possible councillors would consider funding the pool at next year's annual plan hearing.

The financially stretched Southern District Health Board no longer wants to fund the pool, which runs at a $100,000 annual operating shortfall and needs an upgrade costing up to $1 million.

The health board announced this week the pool would close in December, prompting an outcry from pool users, physiotherapists and the wider community.

Of councillors contacted by the Otago Daily Times this week, Cr Calvert was the keenest for the council to take an active role in the pool, including, if necessary, providing operational funding.

Other councillors were either noncommittal or ruled it out because of the council's financial position. Council infrastructure and networks general manager Tony Avery said council staff met the health board and the Otago Therapeutic Pool Trust a couple of weeks ago to discuss the matter.

Mr Avery said he could not pre-empt the view of councillors, but it could be considered in next year's budget hearings.

Cr Calvert said the physio pool was the sort of council spending she supported.

Council spending tended to benefit the young and fit rather than the old, poor and vulnerable, she said. The physio pool was used by some of the most vulnerable and they should be supported.

The already ''seriously busy'' Moana Pool was not as equipped to deal with those who were least mobile and most vulnerable, she said.

''The only reason we don't fund the physio pool now is that somebody has been.''

Council support could include operational funding, while encouraging the pool trust to find additional revenue streams as well.

She suggested the Accident Compensation Corporation could contribute, but the corporation ruled that out yesterday when contacted by the ODT.

She said the community could fundraise for the required upgrade and maybe for some operational funding and she was keen to get involved in that.

Swimming in the pool yesterday with her paraplegic husband Jim Duncan, Sue Duncan said Moana Pool was unsuitable for him to use.

''The disadvantaged are being disadvantaged still further by the decision to close the pool,'' she said. Pool manager Gaye Davies said many swimmers had been asking questions about the possible closure and one had been in tears.

The ODT was contacted by Dunedin physiotherapist Steve August yesterday, who said the pool had rehabilitative facilities that were not available elsewhere in Dunedin.

''It is warmer and quieter than the Moana Pool and slopes from waist-deep to over 3m. ''This means patients can work on rehabilitation in selected degrees of weight-bearing and buoyancy. ''Practical rehabilitation and ongoing self-care of this sort reduces load on the city's hospital and medical facilities.

''I'm appalled at the thought of losing it,'' Mr August said.

Cr Andrew Noone said the council might have a role to play in finding a solution to the pool that did not involve giving money. Cr Neville Peat said giving support was unlikely, and Cr Chris Staynes said the council could not afford it.

Cr Andrew Whiley said the health system was responsible for the pool. Cr Richard Thomson told the ODT on Wednesday it was highly unlikely the council would support the pool.

Cr Thomson, who is also a Southern DHB member, said pool users would have to pay for the pool themselves.

Dunedin Mayor Dave Cull told the ODT on Wednesday that taking on the pool would be a big ask for the council.