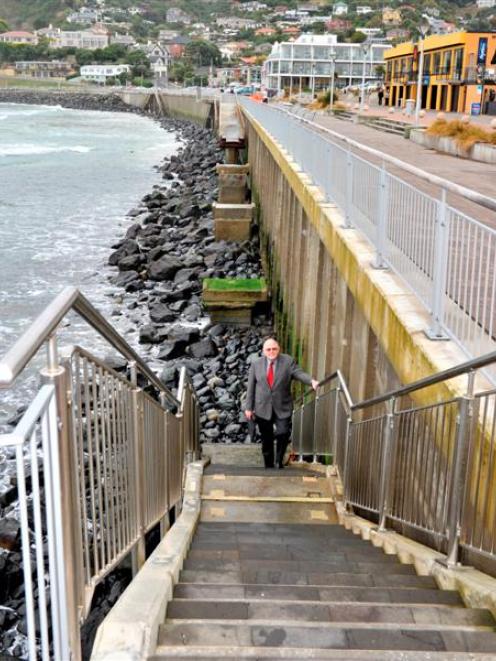 Dunedin City Council transportation operations manager Graeme Hamilton climbs one of the stairways to be strengthened at St Clair, while the remains of a ramp and three of the four stairwells (pictured behind) are to go. Photo by Linda Robertson.
The Dunedin City Council is cutting its losses but still faces a six-figure bill for repairs to the St Clair sea wall, after agreeing to share costs with the company responsible for the project's design.

Work is expected to begin shortly to remove some of the wall's stairs and a ramp, leading from the Esplanade down to St Clair Beach. Other stairs along the sea wall will be strengthened.

In all, three stairways and one ramp in the middle section of the wall will be removed and five stairways at either end will be retained and strengthened.

The council had reached a settlement with design firm Spiire to split the estimated $250,000 bill, meaning each party would pay about $125,000, council city operations general manager Tony Avery confirmed yesterday.

However, the exact cost would depend on the tender process for the work, which was yet to be concluded, and neither party had accepted liability for the sea wall's faults, Mr Avery said.

''It's one of those situations. We've come to an agreement where we'll just get it sorted without any admission of liability.

''It's the nature of the agreement.''

Mr Avery said the council had opted for the deal rather than pursue expensive and risky court action.

''It's trying to get the best outcome we can, recognising the risks around any sort of fraught legal action.

''We're just pleased we've actually come to an arrangement and focused on getting the thing fixed up.''

The repairs were needed after repeated damage to the wall's stairs and ramp since 2004, which were blamed on a mixture of design and construction faults and saw concrete cracked and steel rods exposed by pounding seas.

The sea wall was designed by Duffill Watts and King, which later merged with Commes Consulting in Australia to become CPG, before morphing again to become Spiire late last year.

Council staff have been in talks with the company about a possible settlement for more than a year, and even after councillors pushed last year to begin court action to cover the cost of repairs.

Council staff had cautioned against that, citing likely legal costs of up to $150,000.

A ramp leading from the Esplanade to the beach had since been closed, and partly removed, following storm damage, but the rest would be removed as part of the refurbishment.

Three stairs down to the beach, located closest to Beach St, would also be removed, but another set of stairs at Beach St would be strengthened, as would four stairways closest to Forbury Rd.

Council transportation operations manager Graeme Hamilton said the council had called for tenders last week, but a limited response meant the process might be repeated before work began.

It was expected the work would be completed by mid-June.

The work would be in addition to the council's $346,000 bill for repairs to the sea wall's balustrade last year, after its galvanised steel handrail did not stand up to conditions as well as expected.

Mr Avery said the latest repairs could require some temporary restrictions to beach access while work was carried out.