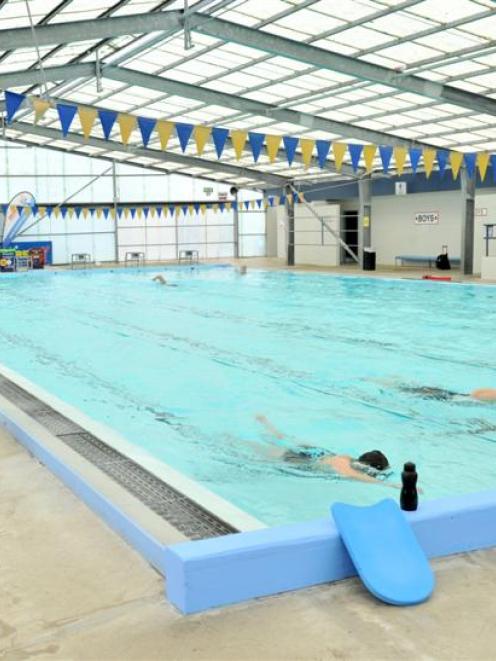 The council has no money for big new projects and while it will help out where it can, the community must drive the project to build a new pool or it will likely not happen, councillors cautioned.

Councillors on Friday decided against spending $30,000 to settle on a site, design and funding requirements for a new pool in Mosgiel, in case that would create an unrealistic expectation the council was going to deliver something it likely could not because of its financial constraints.

Instead, councillors are proposing to give the money to a community-owned trust which would be responsible for the establishment and ownership of a new Mosgiel pool.

They will consult the community through the 2014-15 draft annual plan on the proposal that the council invest $30,000 seed-funding in a trust that would investigate the pool project, in conjunction with the council and the community.

Mosgiel-Taieri Community Board chairman Bill Feather last night welcomed the idea and said the proposed move was positive and he expected the community would welcome it too.

When the topic of a new Mosgiel pool came up at yesterday's pre-draft annual plan discussions, councillors immediately raised concerns about creating expectations in the community, when the council would possibly not have any spare money for any major capital expenditure in the next decade.

As they began discussing what to do, given the previous council's preference for a new pool at Mosgiel, chief executive Dr Sue Bidrose pointed out that no money was set aside for a big investment in a pool in Mosgiel, and that if councillors were thinking about signing off on the council doing the remaining investigative work, they would need to plan when they wanted to raise the debt.

Unless it was done relatively soon, any information gained could be out of date by the time the work was to be done, she said.

To Cr Jinty MacTavish, who expressed concern about how much work had been done on how a new pool fitted with projected population growth in the area and the council's spatial plan, she said staff advised that replacing a failing pool was fine, but building a much bigger pool would have the likely consequence of encouraging growth in a part of town where it was not desired.

Crs Kate Wilson and John Bezett said they supported the council continuing investigations because Mosgiel people had been wanting to get behind the project for a long time, but desired direction on what would be required first.

But Crs MacTavish, Richard Thomson and Chris Staynes all raised concerns about the council sending the wrong signal to the community, by implying it could do something it could not, in terms of funding a new pool.

Cr Thomson said there appeared to be a demonstrable desire for a pool, even more so than for a new library in South Dunedin, yet the council genuinely did not have the funds to do it, and would not for a long time.

He wondered if there was any possibility of the community following the example of the Central Otago community, which had raised enough money to build a new hospital in the area when their existing facility became inadequate and the DHB could not afford to pay for a new one.

''I don't know if we should be looking at a council-owned pool in Mosgiel. What we should potentially be looking at is is there sufficient community drive in the area to form a trust to which we would provide logistical support and fundraising assistance.''

Any money the council could provide now should be to help a such a trust get the process rolling, he said.

That prompted Crs Mike Lord and Lee Vandervis to agree, with Cr Vandervis saying: ''We let the Mosgiel community know we would love them to have a new pool, but we aren't in a position to fund it but can help it with some seed-funding available to a trust to actually do this work themselves.

''If we can empower the people of Mosgiel to organise the kind of pool they want and the substantial funding for it, perhaps along that road the DCC could supply some land or other money along the line.''

''We need to send the signal to the Mosgiel and wider district that the city wants the community to drive projects. We will support them by providing capital, but we need to be driven from the people,'' Cr Andrew Noone said.

''It's a great opportunity for them to collectively work together as a community to achieve something pretty special.''

The draft annual plan will be released for consultation in March.