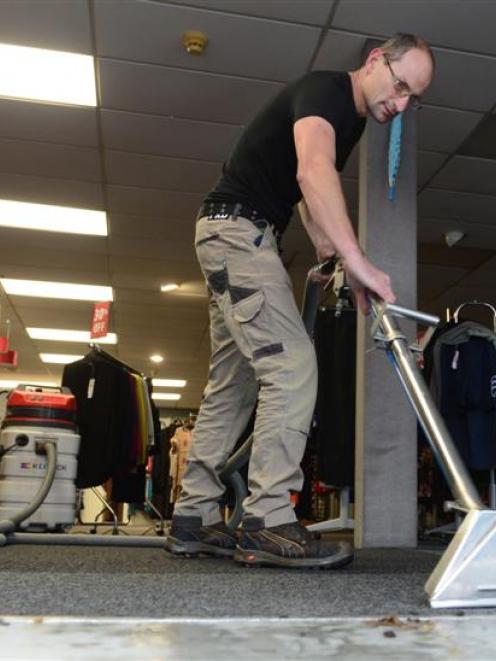 Gary Roberts, owner of women's clothing shop Curve in Gordon Rd, said most of the 200sq m shop was flooded.

The shop, which was insured, had been flooded three times in the past three years.

Although he was annoyed the shop had flooded again, he applauded the council's past work to increase the drainage system in the main street.

In past floods, he had argued with the council about its response to flooding but the response to the flood on Wednesday was hard to fault, he said.

The rain was simply too heavy for the redeveloped drainage system to cope.

Mr Roberts thanked the quick action of Mitre 10 staff in putting sandbags outside his business about noon on Wednesday.

''They just did it. I was away and when I got back the bags were already here.''

The bags kept the water ''at bay'' until about 4pm.

His shop and the neighbouring business, AMI Insurance, were ''flooded to the back wall'', but his other clothing shop, Private Label, a few doors down, was dry.

Chem-Dry staff would be in Curve ''sucking out surface water'' and using ''blowers'' to dry the shop, for three days. `We'll be closed until Monday. We've lost three days' trade,'' Mr Roberts said.