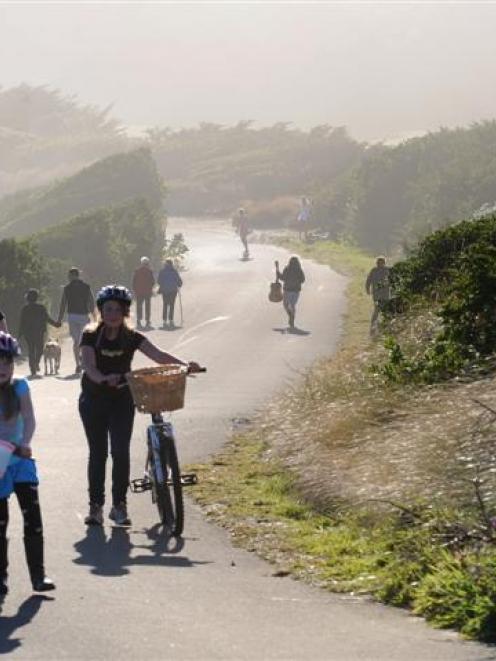 If the decision to reopen the road to traffic at certain times of the day - as decided last year after extensive public debate and consultation - goes ahead, it is hoped road will be resealed by the end of the year and reopened to vehicles in early 2013.

Walkers, runners, dogs, cyclists, roller-bladers and skate boarders, pictured last year on John Wilson Ocean Dr. Photo by Stephen Jaquiery.
Councillors voted last year to reopen the road, closed since 2006, to vehicles from 11am to 2pm on weekdays, subject to resealing, installation of speed humps and a 30kmh speed limit.

The road would be opened and closed each weekday by council security staff.

The road works were scheduled for the 2012-13 financial year, but councillors were told in June that would depend on the council receiving enough subsidy from the New Zealand Transport Agency to cover its whole minor improvements programme for the year.

Subsidies were announced last week and parks and recreation manager Lisa Wheeler confirmed the funds were available to do the work on John Wilson Ocean Dr this financial year.

Despite the decision on the road's future last year, councillors instructed staff in June to investigate two more ideas that surfaced in public submissions on the long-term plan.

The ideas were to use the money set aside for speed humps on the road for a card-access barrier arm instead; or use the road as a training area for Nordic-style cross-country ski dog training.

Ms Wheeler said staff had investigated the card-access barrier idea, put forward by the John Wilson Promenaders, "but everyone spoken to said don't do it".

There was a particular issue with the barrier's susceptibility to vandalism. Councillors would be supplied with more detail next month, she said.

She intended to speak to Ski Dogs NZ in the next week to discuss its proposal to help fund a strip of the road to be sealed in exchange for its use as a Nordic-style cross-country ski dog training track.

That proposal depended on the road being closed to traffic, Ski Dogs NZ said in its submission.

Both it and a separate proposal to provide commercial donkey rides on the closed road were activities that would require special use licences - a process that was reasonably complicated, Ms Wheeler said.

The donkey-ride idea was first proposed to council staff last year by Dunedin Donkey Co-op secretary Jim Moffat, but no-one at the council was able to give further details on Friday, and Mr Moffat could not be contacted.

A public notice appeared in the ODT last week saying the co-op was in recess until further notice, after "the inability of the DCC staff to allow for a role for them" on John Wilson Ocean Dr.

Councillors will consider a report on road that considers the various proposals for it at the next meeting of the community development committee on October 15.

Council senior traffic engineer Ron Minnema said, depending on the councillors' decision, the road could be sealed by the end of the year.

It would not be reopened to traffic until all the required work was done, including the speed-limit change coming into effect.

The speed limit on John Wilson Ocean Dr will be discussed at a city council hearing on wider speed-limit changes on Wednesday.

A report to the hearings subcommittee says the proposal is that the new speed limits come into effect on February 1, 2013.