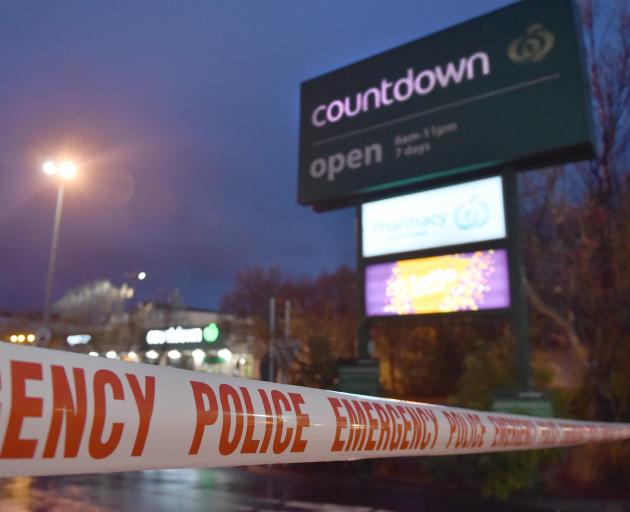 Countdown Dunedin Central was closed for several days following the stabbing incident. Photo: Gregor Richardson
Countdown has been called to act on security, as more than 70% of union members report experiencing aggression from customers.

Two of them remained in Dunedin Hospital yesterday.

The incident sparked a nationwide conversation about the safety and security of retail workers.

Union retail, finance and commerce secretary Tali Williams said the union surveyed members about their experience with abuse over the weekend, and the results sent a strong message.

About 70% of respondents had experienced aggression from customers.

"There were lots of really jarring examples of what was going on for people," she said.

The two most pressing concerns were the need for safer staffing levels, and better store security.

The level of security guard presence differed from store to store, and some members felt guards were not rostered on at the times they were needed.

Ms Williams said the union wanted Countdown management to sit down with it and work out what safe staffing levels would look like. One example was not having sole staff members in any department, she said.

Staff also wanted senior management to have meetings in every store around the country to discuss safety measures specific to each site.

"Every worker wants to be heard on what goes on in their store. They want to sit down with the company and they want to be heard."

The union had also raised the issue of security around stores, like Countdown Dunedin Central, that had pharmacies within them.

She believed Countdown was reasonably receptive and open to dialogue, and it would be responding over the coming days.

There had been some discussion following the stabbing about the use of body cameras on staff, which were being trialled at supermarkets in Australia.

"We just want to get all the basics sorted first before we start talking about body cameras or anything like that," Ms Williams said yesterday.

Dunedin staff needing more time before returning to work had been given discretionary leave, she said.

In a statement, Countdown general manager of corporate affairs Kiri Hannifin said management was pleased to meet the union and member delegates.

"It was good to talk about our shared concerns, along with our shared desire to address aggression and conflict in our stores."

A man has been charged with four counts of attempted murder in relation to the stabbing.