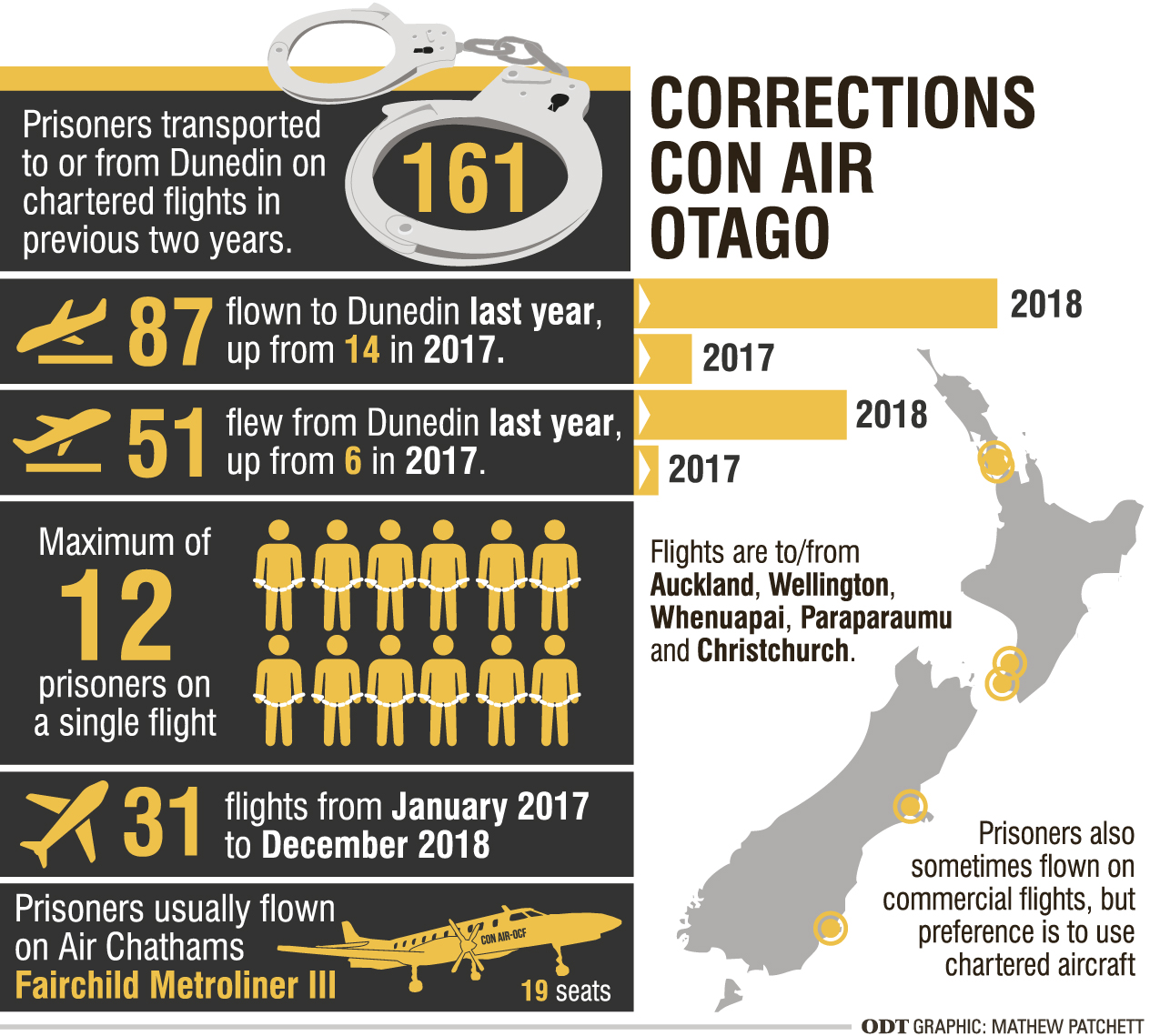 The number of prisoners flown south by Corrections on chartered flights increased more than fivefold over the previous two years.

However, the Corrections Department refused to disclose the cost of the 31 chartered flights to and from Dunedin Airport in 2017 and 2018, saying first the information on costs was not recorded in a way it could be easily provided, before saying later that the costs of those flights were ''commercially sensitive''.

Eighty-seven prisoners flew to Dunedin Airport on chartered aircraft last year, up from 14 in 2017, according to figures released under the Official Information Act.

In the opposite direction, 51 prisoners flew from Dunedin last year, bound for airports including Paraparaumu, Whenuapai, Christchurch, Wellington and Auckland, up from just nine in 2017.

Corrections national commissioner Rachel Leota refused to divulge the cost of the flights, saying first such information was ''not recorded in a way that it can be readily provided''.

A Corrections spokesman later said in an email that the cost of transporting prisoners by plane was ''commercially sensitive''.

The department earlier had said prisoners were also
transported on commercial flights, but only under exceptional circumstances.

Corrections deputy national commissioner Andy Milne said the fastest method of transport between the North and South Islands was air travel and prisoners could also be flown between North Island prisons.

''This process enables us to ensure that the time that a prisoner spends outside of a prison is limited, thereby minimising risk to the safety of the public.

''It also means that prisoners are not spending long periods of time in a cell inside a prisoner transport vehicle.''

Corrections officers accompanied prisoners on all such transfers and inmates of all security classifications could be transported by air, depending on a risk assessment, he said.

Asked about the increase in prison transfers from 2017 to 2018, Mr Mile said that was down to the swelling prison population at the time.

''We manage the prison network nationally, and it was necessary to move prisoners between sites due to the availability of accommodation at Otago Corrections Facility.''

Corrections was also committed to delivering ''value for money'' in part by expanding its use of audio visual links for court appearances, Mr Milne said.