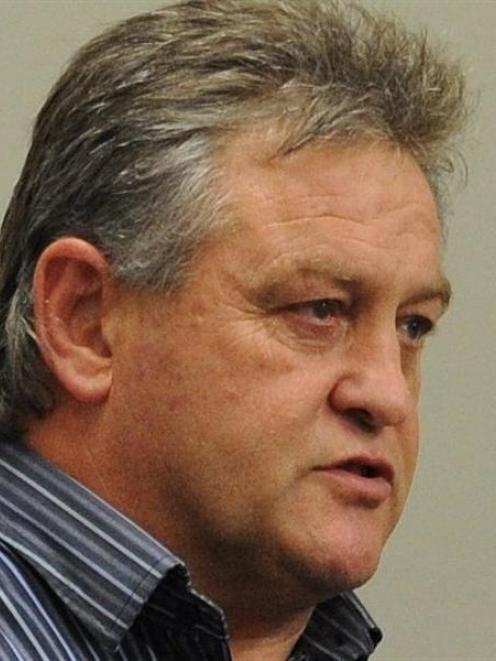 Calvin Fisher.
A landowner embroiled in a dispute over Saddle Hill quarrying is threatening to take the Dunedin City Council to the Environment Court for a second time.

The warning came yesterday from Calvin Fisher, a union official and the director of Saddle View Estate Ltd.

He was reacting to the Dunedin City Council hearings committee's decision this week to reject two subdivision applications for the slopes of the Dunedin landmark.

Mr Fisher's company was among three landowners who together filed two applications for consent to subdivide four 15ha properties.

If approved, their proposals would have together created 16 new undersized rural properties, each of between 2ha and 11.2ha, spread over 60ha of land.

The committee, chaired by Cr Colin Weatherall, released written decisions this week declining consent for all the requests.

Mr Fisher said he was ''obviously disappointed'' by the latest decision.

''It's hardly a pro-growth policy for the city ... The area would only be enhanced, in our opinion,'' he said.

Mr Fisher said he would meet his advisers next week to discuss options before deciding whether to lodge an appeal.

If he did, it would be his second Environment Court fight with the council, as Mr Fisher's company was already awaiting a ruling on the legality of quarrying on Saddle Hill.

The committee's rulings on the proposed Saddle Hill subdivisions came in two separate decisions, responding to the separate applications by three landowners.

The first application, jointly by Mr Fisher's company and landowner Kim Taylor, sought to subdivide 32ha of land into 10 undersized rural sites, spread between 103 Riccarton Rd East and 4A Braeside.

The second, by Blue Grass Ltd, sought to subdivide another 30ha of land into another six sites, spread between 31 Main South Rd and 101 Riccarton Rd East.

However, despite coming as separate applications, the committee concluded there was a ''co-ordinated effort'' between landowners in the area to create new rural-residential blocks on Saddle Hill.

The committee worried granting consent for the first two applications would prompt other landowners to follow in their footsteps.

The owners of five more 15ha properties on the hill were not seeking consent to subdivide, but the committee did not accept reassurances from the applicants that further subdivision was unlikely to occur.

Should the applicants' consents be granted, it would be ''extremely difficult'' to say no to later requests from other landowners in the area, the committee concluded.

The result could be the fragmentation of the area - once a 250ha farm that had been broken up into smaller properties - into even smaller 2ha lots, it warned.

''The committee considers that the provisions of the rural section of the district plan would be significantly undermined for this location,'' it concluded.

The committee rejected the Fisher and Taylor proposals, saying the northern slopes of Saddle Hill were already developed to the ''maximum extent possible'' under rural zoning.

Without a plan change process to consider denser development, any further development would have effects that were more than minor, against district plan rules, and inconsistent with Environment Court case law, it said.

Their proposal for 4A Braeside involved a ''particularly prominent'' site on the hill's northern slopes, visible from many viewpoints and located in part within the Saddle Hill landscape conservation area.

Further development would ''change the character of the land'' by creating a rural-residential area that eroded the openness of the rural landscape, the committee concluded.

New homes at 103 Riccarton Rd East would also fall partially within the landscape conservation area, and be visible from parts of the Taieri Plain. The decision to reject Blue Grass Ltd's plans for 31 Main South Rd and 101 Riccarton Rd East cited many of the same reasons, but also stressed the need to protect the ''respected landmark'' of Saddle Hill.

''The committee considers that this is not achieved through the subdivision and development of the land to a rural-residential level.''