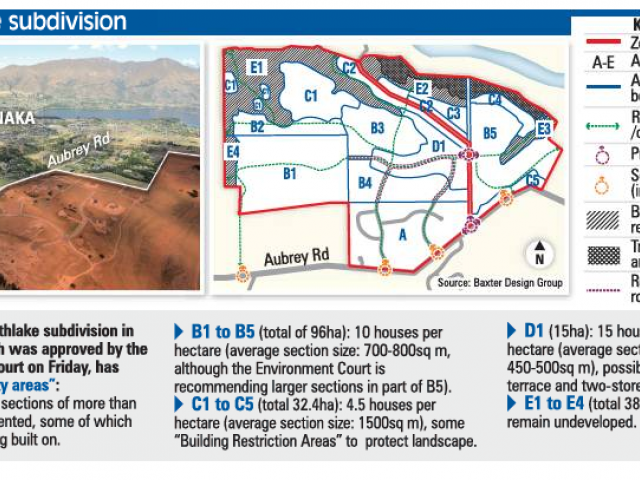 The Environment Court has approved the Northlake subdivision in Wanaka which will eventually increase the number of houses in the town by a third.
An Environment Court battle over Port Otago's proposal to continue depositing dredging material at Aramoana, Heyward Point and Shelley Beach has been avoided.

The Environment Court says it is not satisfied, at this stage, that there are any existing use rights for quarrying on Saddle Hill.

The Dunedin City Council has until Friday to determine whether it will make a decision on the controversial designation of land for the realignment of State Highway 88 near Dunedin's Forsyth Barr Stadium - or hand the responsibility for the decision to the Environment Court.

One of the largest Environment Court mediation processes to be held in Dunedin enters its second round next week.

A landowner embroiled in a dispute over Saddle Hill quarrying is threatening to take the Dunedin City Council to the Environment Court for a second time.
The Environment Court has declared it has the jurisdiction to hear and determine the notice of appeal on Arrowtown South lodged by two of its landowners.
Discussion on the recent Environment Court decision on whether damming should be banned on the Nevis River was stifled at the Otago Fish and Game Council's meeting this week, after it was revealed some councillors had yet to read the report.

The Environment Court has rejected an appeal against an application by a Ripponvale couple to retain their existing home as accommodation for workers or travellers after they build a new house on the property.
Consent for Nzone Skydive Queenstown to increase its number of flights should be declined, or the cap at 35 flights a day should be maintained if consent is granted, Jacks Point parties say.
The Environment Court was correct in issuing consent for the proposed Wakatipu Pak 'n Save supermarket ahead of the final decision from a separate court hearing on the zoning of the Frankton Flats, the owner of Pak'n Save, Foodstuffs, said.
Any contamination of Otago's inshore coastal environment as a result of harbour dredge dumping is highly unlikely but could be of high impact if it does occur, Environment Court judge Jeff Smith says.
A potentially precedent-setting Environment Court case begins in Christchurch today with coal mine developer Bathurst Resources facing legal challenges from Forest and Bird to stop strip mining for coal on the Denniston plateau above Westport, on the West Coast.

Environment Court challenges will be heard in October over resource consent permits issued to listed West Coast coal mine developer Bathurst Resources.
Land suitable for industrial use was in "extremely short supply" in Queenstown and siting a Pak'nSave supermarket and a Mitre 10 Mega store on such land is not appropriate, the Queenstown Lakes District Council says.

A neighbouring farmer to Arrowtown says extending the boundary would have economic benefits through the increase in population and more affordable housing.

Another hurdle has fallen for West Coast coal miner Bathurst Resources, angering environmentalists, with the news the effects on climate change will not make the agenda of forthcoming Environment Court resource consent challenges.
A High Court decision on the proposed second campus to cater for 112 St Joseph's School pupils, on Speargrass Flat Rd, near Arrowtown, was reserved after a two-day hearing in Christchurch last week.
The Environment Court will hear a declaration on the relevance of coal to climate change issues later this month, part of an appeal process against consents granted to Bathurst Resources last year.
An Environment Court decision will allow Oceana Gold to begin work on its plans to expand its mine at Macraes.