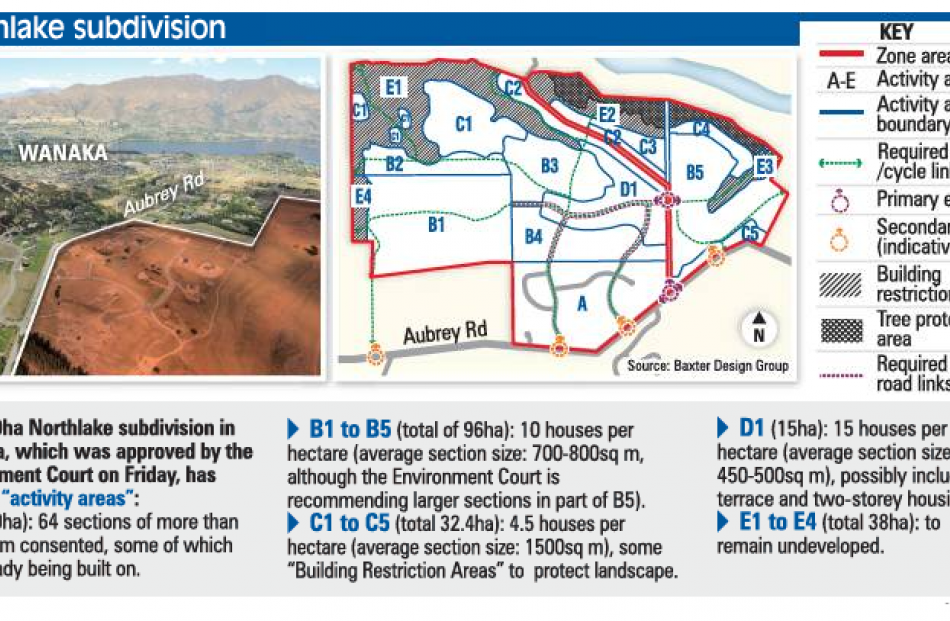 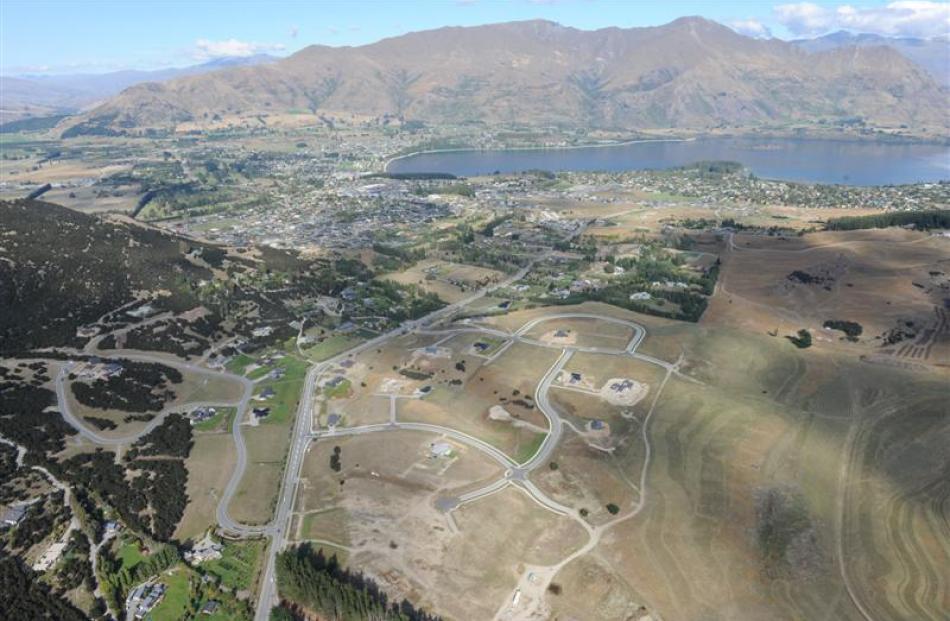 An aerial view of Wanaka showing the subdivision area. Photo by Stephen Jaquiery

The Environment Court has approved the Northlake subdivision in Wanaka which will eventually increase the number of houses in the town by a third.

The 220ha subdivision between Wanaka and the Clutha River was approved by independent commissioners for the Queenstown Lakes District Council in June, following a hearing of 124 submissions, 85 in opposition.

The decision, accepted by the council, was appealed to the Environment Court by a group of 26 submitters, called Appealing Wanaka Inc.

The four owners of the land wanted to subdivide it into 1600 lots, ranging in size from 450sq m - which could include terraced and two storey housing - to 1500sq m, plus commercial and recreational areas.

Community facilities, including a pool, gym, tennis courts and playground, would be built when enough sections had been sold.

Appealing Wanaka opposed the plan on 16 grounds, including that there was already enough land zoned residential to meet Wanaka's needs, the court could not make a decision in the absence of an urban growth boundary and that it did not comply with the district plan.

The group wanted the plan change cancelled, or capped at 442 to 710 houses on at least 800sqm sections and deferred until December 2019.

Following a hearing in Wanaka in March, Judge Jon Jackson rejected claims the plan change would lead to an oversupply of sections and therefore disjointed neighbourhoods at both Northlake and other already consented subdivisions in Wanaka, including Allan Dippie's 100ha residential and commercial development, Three Parks.

In 2013, the council estimated it had zoned enough land for 5686 houses and that the likely demand for houses in the next 20 years would be 2300.

But experts for Northlake told the court it was necessary to plan ahead as Wanaka was growing ''exceptionally fast'' - more than 28% between 2001 and 2013 - and long term plans were being adopted in other parts of the district.

They also said the Wanaka Structure Plan anticipated much of the Northlake land would be developed and the subdivision would not strain the town's existing infrastructure.

The court accepted the evidence: ''We consider the argument PC45 will not manage the adverse effects of development in an integrated way is significantly overstated.

''Much will depend on the internal staging adopted by the developers and indeed on market conditions at the time of sale. Even if those go badly, we consider the effects will be relatively temporary.

''In the longer term, Wanaka will fill out to within a respectful distance of its natural topographical boundary (the Clutha River), in a completely appropriate and well integrated way.''

The court also noted residential development in Wanaka was dominated by the Dippie family, creating a ''potential for monopolistic behaviour ...

''There is a probability that subdivisions in the Three Parks area may be slower to sell ... However, we consider the social costs of slower sales would be relatively low, especially if the landowners at the time lower their prices as a response to new market conditions ...

''That would enable the Three Parks area to become an area for aspirational owners - people who wish to work in the area but cannot otherwise afford to live there.''

The court also disagreed with Appealing Wanaka that the Northlake plan contravened the district plan and the Wanaka Structure Plan, saying it encouraged ''imaginative'' development which was convenient to schools and future public transport; observed environmental constraints and provided more affordable sections.

Twenty sections would be offered to the Queenstown Lakes Community Housing Trust for up to $160,000 each, as affordable housing.

Concerns were also raised at the hearing that the Northlake commercial area, which could include a cafe, dairy, takeaway food outlets and hairdressers, would affect the viability of existing and already consented shopping areas, such as central Wanaka and Three Parks.

But the court accepted other evidence that there would be no impact and the development would reduce residents' travel for day to day needs.

Appealing Wanaka has further appeal options, but attempts to contact its represenatives yesterday were unsuccessful.