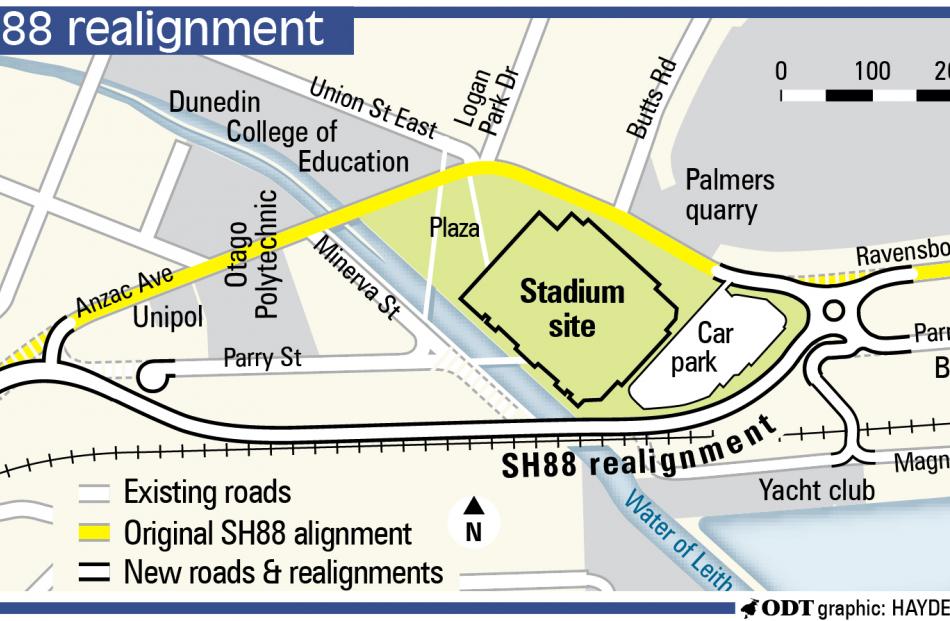 The Dunedin City Council has until Friday to determine whether it will make a decision on the controversial designation of land for the realignment of State Highway 88 near Dunedin's Forsyth Barr Stadium - or hand the responsibility for the decision to the Environment Court.

It publicly notified the requirement for the land last month, after a previous non-notified designation was quashed by the court following the council's admission it had not followed the proper consultation process.

The new road has been built, but final measures including traffic lights have been in limbo while the designation issue is resolved.

One of the affected landowners, Doug Hall, who is running for the DCC, took the council to court to argue the original designation was illegal because he was not notified as an affected party, and sought an injunction stopping the traffic lights from being switched on until the resolution of safety issues at that intersection and around access to his property as a result of the realigned road.

Affected parties, including Mr Hall, were consulted on the new designation late last year, and again earlier this year after the notification of the requirement was delayed while negotiations with Mr Hall continued.

The realignment was originally to go through Mr Hall's property, but was later changed to go around it, affecting his access.

The normal process for a publicly notified designation requirement would be a public hearing of the submissions before the council.

Council senior policy planner Paul Freeland said an independent consultant hired by the council would then make a recommendation to the council, which would make the ultimate decision on whether the designation, as notified, would go ahead.

However, it also has the option of referring the decision-making directly to the Environment Court.

That would happen in cases where the decision was very difficult for the council, it was expected to end up, via appeal, in the Environment Court anyway, or the situation was of national importance to the city or the roading network.

In that case, the council would send its recommendation to the court. Submissions would be read and heard by the court also.

The council had never before sent a decision straight to the Environment Court, Mr Freeland said.

Mr Hall has already indicated publicly he would ''fight'' the proposed designation as notified because it still did not provide safe access to his property.

The council had received 13 submissions by Friday, the end of the submission period. Submitters included the University of Otago, Port Otago Ltd, the NZ Transport Agency, the Otago Regional Council and several heavy transport companies among others.

• Submissions from companies owned by Doug Hall, one of the parties affected by the realignment of State Highway 88 in Dunedin, were received by the Dunedin City Council within the statutory timeframe and will be included in the process for designating the land for the realignment.

The submissions from Anzide Properties Ltd, Hall Brothers Transport Ltd, and Dunedin Crane Hire (2005) Ltd were received by deadline on Friday, but were not processed until today.