Amber-Rose Rush and her mother Lisa Ann. Photo: Supplied
The blood of a teenage girl was found in a doctor's car, on his shoes and in a bag in which he allegedly put his clothes, a court has heard.

Amber-Rose Rush (16) suffered six stab wounds to her neck while she lay in her bedroom at her Corstorphine home on February 2 last year.

Yesterday, ESR forensic scientist Rosalyn Rough said she would have expected to see blood spatter around the room if there had been a violent struggle, but there was no such evidence.

The man who allegedly inflicted those wounds was junior doctor 32-year-old Venod Skantha, who has spent the past eight days before the High Court at Dunedin on trial charged with murder and four counts of threatening to kill.

The Crown case is that the defendant killed Amber-Rose to protect his faltering medical career.

Just minutes before she was killed, the girl had told him she was planning to make sexual allegations to both police and the defendant's Dunedin Hospital superiors.

Ms Rough, who examined the scene at Clermiston Ave, said Amber-Rose died lying on her front on her bed.

Swabs taken from various areas of her body and under her fingernails failed to give any clues as to the identity of her assailant, the jury heard. 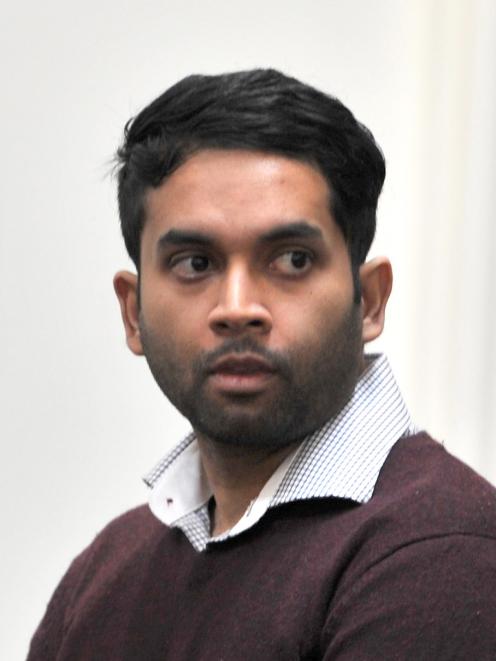 Two large blood streaks on the wall and one on the light switch were similarly of no help.

But investigators had more success at Skantha's Fairfield home.

Blood spatter found on the inside of the passenger-side window of his silver BMW matched Amber-Rose's DNA profile, Ms Rough said.

The six tiny droplets could have been flicked or cast off a blood-stained object, she told the court.

Tests also revealed there was a transfer stain on the inside of the passenger door, which would have likely come from a bloody surface coming into contact with it.

The DNA profile could have been a combination of the defendant and Amber-Rose, the jury heard.

The Crown's key witness - the teenager who allegedly drove Skantha to and from the scene of the crime - said the defendant was in the passenger side of the car as they left the address.

He told the court earlier this week he saw the doctor place a bloodied knife in the side pocket of his door.

Ms Rough tested that area and found no evidence of blood.

The 24cm stainless-steel kitchen knife the Crown says was the murder weapon was analysed by scientists, along with the other blades and a knife block found in Skantha's home.

She was asked by Crown prosecutor Robin Bates how easy it was to clean such an item.

"There's no cracks or grooves for blood to get trapped in. I imagine these are designed for easy cleaning," she said.

After the alleged murder, Skantha and his teenage friend travelled to Brigid Clinton's house in Balclutha, where they spent the next two nights.

The teenager previously told police the defendant had taken his clothes there in a bag, where they were burned in a large plant pot.

Ms Rough said there were blood "flecks" inside a white plastic supermarket bag found at the property which were likely from Amber-Rose.

The teenager also gave evidence he had been instructed to wash Skantha's grey suede shoes but had deliberately left a clear area of blood for police.

Ms Rough found an undiluted droplet from the victim beside an eyelet on the right shoe.

Such an elliptical spot, she said, could have come from blood falling directly on to a surface or dropping on to it from another blood-stained object.

Ms Rough confirmed she had not checked its contents.

"It seems quite extraordinary when you're looking for evidence of a clean-up and you don't look in a washing machine," Mr Eaton said.

He asked whether it was a "monumental mistake".

The witness acknowledged it was a "possible oversight" and potentially the result of a communication breakdown.

He denied doing so.

There will be further scientific evidence today before the trial resumes next week.

Woman sentenced for sex with 15-year-old

No parole for gang member who blackmailed worker