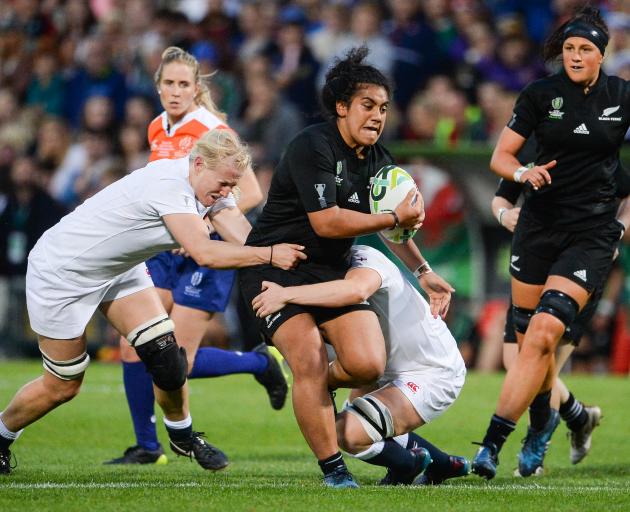 Victoria Subritzky-Nafatali (with ball) during the 2017 Women's Rugby World Cup final. Photo: Getty Images
A star of the Black Ferns World Cup-winning team has been charged with drink-driving.

Victoria Samata Subritzky-Nafatali (28) — listed in court documents as a teacher aide — appeared in the Dunedin District Court yesterday and was remanded on bail until next week.

She was stopped while driving in Castle St on May 27 and blew a reading of 600mcg of alcohol per litre of breath.

The defendant — described as a “deceptively quick, highly skilled and versatile five-eighth” by the Ultimate Rugby website — played a key role in the Black Ferns’ 2017 Rugby World Cup triumph in Ireland.

After the team’s 41-32 victory over England in the final, Subritzky-Nafatali received the honour of being named in the tournament “dream team”, the best 15 players from all competing nations.

The defendant first played provincial rugby for the Otago Spirit as a mere 15-year-old in 2007.

Subritzky-Nafatali made the first of her 19 Black Ferns appearances five years later and played for the Counties-Manukau Heat in 2015, where she won the Farah Palmer Cup — the national provincial championship.

Last year, while studying carpentry in the Far North, she represented Northland, which fielded a women’s representative team for the first time in nearly 20 years.

"If I was to offer advice to aspiring young female rugby players it would be to not let anyone say you can’t do it. If you set your mind to something, no matter what sport it is, you can achieve it with a bit of drive,” she told The Northern Advocate.

"And take every opportunity you get because if you don’t, someone else will."