Jeremiah William Witana-Gates (29) appeared for sentencing at Oamaru District Court on two charges of unlawful possession of a pistol, possession of an offensive weapon, possession of cannabis, and driving while forbidden. All charges stemmed from an incident on November 30, 2019.

In summing up, Judge Tom Gilbert said Witana-Gates had been driving in Port Chalmers when a vehicle in front of him took a wide berth and pulled into a parking space.

In anger, the defendant parked next to the victim, who was with his wife and three children, aged between 5 and 7.

Witana-Gates tooted his horn and yelled "sieg heil" aggressively at the victim, making gang gestures with his hands.

The victim gestured to the defendant, asking what was wrong, and got out of his car. He took one of his children from the back seat and went to the defendant to apologise.

The defendant got a briefcase containing two sawn-off .22 calibre pistols, took one out and pointed it at the victim, who was about 4m away, saying words to the effect of "I wouldn’t if I were you".

The victim put his hands in the air, and walked backwards apologising. The incident was seen by the victim’s wife and children, who were left shaken and traumatised.

That was "hardly surprising, given what occurred", Judge Gilbert said.

A police search of the defendant’s vehicle turned up the two pistols, two bongs and 16 point bags (three containing traces of a white powder), seven foils of cannabis, a kitchen knife, and two socks with pool balls inside them and the ends knotted.

Witana-Gates had been on bail since the incident until he failed to appear in court in September relating to an alleged August assault on his partner. He had been remanded in police custody since then.

Counsel Codi Lillie said her client had missed the birth of his third child and also Christmas with his three children. He considered himself a family man, and his eldest son, in particular, missed his father.

The defendant, who had gang connections, did not do well in jail, as it forced him to mix with people he would usually avoid. He had no relevant criminal history — his last conviction was in 2011 and not violence-related, she said.

Judge Gilbert said the reports he had received on Witana-Gates were "mixed". He had been a difficult prisoner in custody, having assaulted a prison officer and thrown urine at somebody.

"You can be entitled at times, and struggle when people suggest you modify your anger," he said.

Working in Witana-Gates’ favour was that he was in a long-term relationship and had a strong work background providing for his family.

On the driving charge he was convicted and discharged.

Witana-Gates denied assaulting his partner, and a defended hearing date has been set down for March. 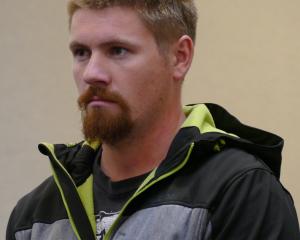