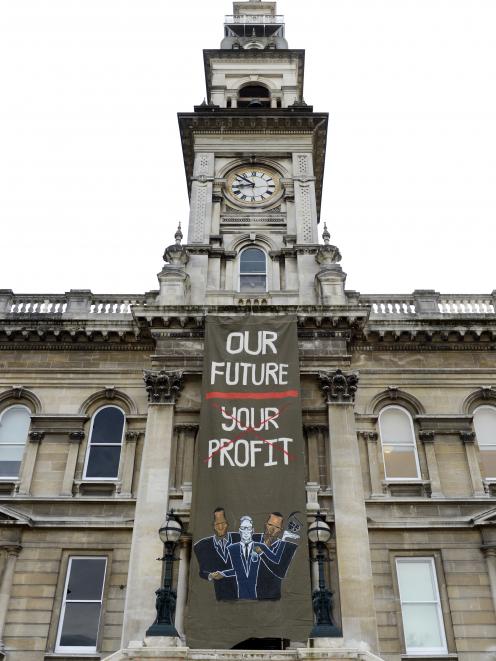 A large anti-mining banner was unfurled down the front of the Municipal Chambers. Photo: Gerrard O'Brien
The mining industry was left in no doubt that Dunedin's council is not welcoming it here and is on notice to figure climate change strategies into their operations.

As the Mining Forum at the Dunedin Town Hall got off to a belated start this morning, the close to 300 delegates inside could hear the faint chanting of more than 100 protesters outside.

Delegates had been forced to arrive at 6.30am for an 8am start, with several still stranded outside at 8.30am, as protesters shadowed and rushed myriad entrances into the hall and council building, with several physical confrontations taking place.

Two chief executives of gold and coal companies had coal thrown at their feet outside.

When Dunedin Mayor Dave Cull  spoke he grabbed the immediate attention of the delegates.

"So to be clear, if you're promoting fossil fuel exploration, extraction and exploitation and especially its expansion, then understand you are at odds with this community and my council that represents it,'' he said.

He acknowledged Dunedin was built on gold, from the rushes of the 1860s and remained important today, given Ocean Gold's Macraes operation in East Otago contributed $80 million in local gross domestic product (GDP) and 500 jobs.

Between Macraes and Waihi in the central North Island, Oceana produces about 98% of the country's gold annually.

"And I acknowledge that over the years we were a city reliant on a good deal of fossil fuel energy.

"Unfortunately we still are,'' he said.

However, Mr Cull made it abundantly clear to the delegates the community's attitude to fossil fuels had changed since gold was discovered more than 150 years ago.

"We don't have any right to trade in our children's and grandchildren's futures just to make a quick dollar now,'' he said to the silent audience.

He said the protestors outside, "however impolite and disrespectful''  were expressing the "overwhelming view of this community and my council''. 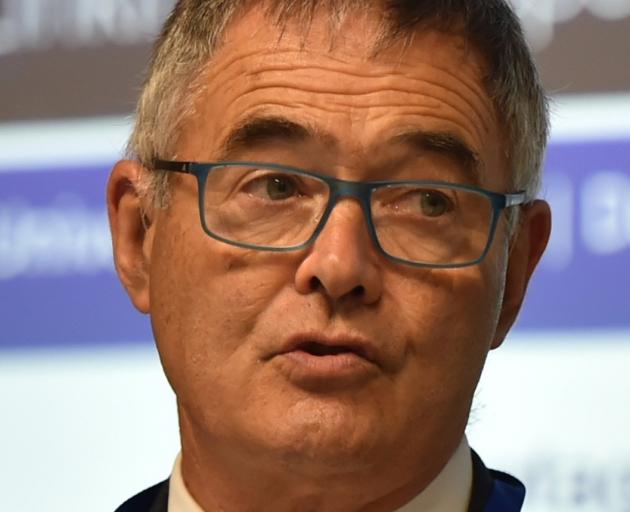 Dave Cull. Photo: ODT files
Mr Cull said while the forum was discussing traditional mining areas such as coal, he hoped it would be "genuinely discussing''' climate change and sustainability, so that people could have informed debate.

"However, I think you will now be under no illusions about which side of the debate I and this city have landed on,'' Mr Cull said.

He said in the medium to long term, sea level rise, prompting rising groundwater, would further increase the risk and potential impact to low-lying areas like South Dunedin, where there was 2700 homers less than 50cm above the spring high tide mark, which was more than in any other city of New Zealand.

"A higher frequency and intensity of rain events poses the most immediate risk and potential impact here.

"We've had several major flooding events in Dunedin in recent years with massive financial, physical and emotional impacts,'' he said.

He said "incredibly hard decisions'' were now having to made in Dunedin about how to protect communities from flooding, coastal erosion and sea level rise, because of decades of inaction by governments; local, central and international, and also the fossil fuel industry.

He said there had been an undermining of healthy public policy by the powerful influence of vested interests, the fossil fuel industry.

"But that harmful influence can no longer be tolerated.''

That is why the Dunedin City Council and University of Otago divested their shares from companies associated with fossil fuel exploration, extraction and exploitation, he said.

"I suggest the beneficiaries of business and industry  you and your shareholders - are responsible to the communities your industries work in and affect,'' Mr Cull said.

Meanwhile, Rory McCarthy, speaking at the public forum at the start of today’s Dunedin City Council meeting, urged councillors to declare a climate emergency in Dunedin.

But he also urged the council to go further, from pushing to end the city’s reliance on fossil fuels and create a Citizens’ Assembly, to promoting public education on initiatives like car-pooling and solar panels.

“This isn’t a game or a statistic. This is our very lives and the future of our children.”

A "Get Ready to Go Ballistic" indicative statement :)

The Mayor is pretty out of order, making such claims with no substantive evidence to support them. And let's get real here the major cause of the floods in South Dunedin almost four years ago can be squarely allocated to poor Council maintenance, repair programs and general Council neglect. Time for this Mayor to get his own house in order before trying to give marching orders to the mining sector. Once that is done maybe Town Hall will have some credibility with the majority of its citizens who continue to suffer in silence and wonder at the antics of this Council.

100 protesters is "under-whelming" which is more factual.

Hear hear. Around 100 vocal protestors amounts to less than 0.1% of the city's resident population, for goodness sake. They certainly do not speak for me, or most of my family and associates. Once again we have Mayor Cull making statements out of touch with reality.

There will be more teachers protesting about this rotten Govt tomorrow than the underwhelming 100 protesters . And mr Cull you just remember all those that could be employed by the miners that vote . I just hope all the miners at the Mining Forum take note Cull spoke for him and his 2 or 3 mates he did not speak for me and 1000s of others in our city . Not the pissy little protest of 100 LOL bet the cops were shaken in there boots lol .

Cull tells another 'big one'. If this council actually listened to the ratepayers then the following recent spending would not have happened; the stadium, cycle paths, elimination of carparks, sale of Waipori dam, fluoridation of water, running empty & heavy buses, maintaining under-utilised services (eg libraries) etc.

If only we the little people could vote on each pressing issue then things would really be representative. We all have the internet and it can be set up so easily. But why would they?

Any central or local government control structure that does not listen to the people needs to be voted out.

I really don't think 100 protesters is a true representation of Dunedin. A speech by our mayor telling another industry to go away, really Dave

Since when did Mr Cull have a mandate to speak for the Dunedin community's views on the business of fossil fuels?

He doesn't. Talk about foolish over-reach!

And no wonder the Dunedin council gets seen as unfriendly to business.

Interesting that the major sides with the aggressive climate change cultists. He might have adopted climate change as a salve to excuse the flooding in South Dunedin, but that doesn't make it true. Science is not consensus. It is questioning. It might be interesting to hear from people who were too busy working to protest. Those whom might enjoy a high paying mining salary in the Dunedin region with which to support their family. Good jobs grow families, for generations. The burn-it-all-down green-rhetoric offers no solid solutions, just a nihilistic emptiness. Sometimes to grow something takes effort. We have a responsibility to generate jobs and trade, and a future. Some of us hear the call to be good. To take up responsibility and strive. The great changes come from building, not knocking down. I see nothing in the chanting which offers solutions and creation, just destruction. What is the point in smoking joints in caves, chanting in the coming snow storms, dead broke.

Well said Mayor Cull. Although I support your comments and back the council's stance on fossil fuel I am not sure that it is accurate to claim that this is 'the overwhelming view of this community'. Sadly.

So we have a few loud protestors and a failed mayor claiming to represent the major part of the population. No they don't. They represent an extremely small number of extremists who should be ignored and, when necessary, prosecuted.

The fossil fuel industry is quickly becoming somewhat of a fossil itself. Times are changing, and for once Cull is right on the money with his comments.

Mr Cull, the only way you could accurately account for any support of your nimby ideology by our community would be to put the matter out to a referendum, for all citizens of greater Dunedin to vote on, but hey that would be democratic wouldn't it..

The sooner we, the actual whole community can vote on every decision made by servants of the public the better.

Well I'm not entirely surprised at Mr Culls' speech.
I welcome further drilling, discovery, investment and jobs and more fossil fuel production so Mr Cull did not speak for me at the meeting today.
Mr Cull spoke out like that because he is not running for election in the next local body elections. If he was running he would be more politically "cautious". Mr. Cull will now go for a 2020 Labour/Green seat or list seat in the General election. Probably Green.

Susan Krumdiek is not welcome to speak in Dunedin? Just do an internet search and see who she is and what she does.