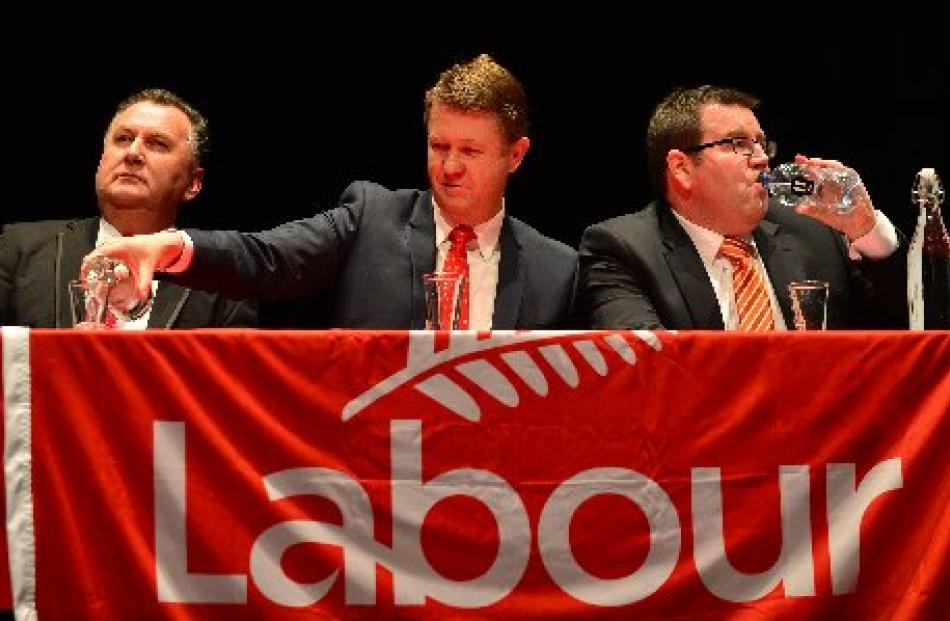 Shane Jones (from left), David Cunliffe and Grant Robertson at the leadership meeting in Dunedin yesterday. Photo by Peter McIntosh

Grant Robertson was the overwhelming sentimental favourite when he staked his claim in Dunedin yesterday to become the leader of the Labour Party, but David Cunliffe was seen as the most impressive at the podium.

Those spoken to by the Otago Daily Times after the leadership meeting in the city rated Mr Cunliffe as their pragmatic pick for leader, with Mr Robertson the home-town favourite and Mr Jones last, although his jokes went down well.

Mr Cunliffe started the leadership campaign without much caucus support, but it appears the numbers are closing ahead of the final decision next Sunday.

Mr Cunliffe was seen as saying the right things to appeal to the audience of the day, Mr Robertson was driven by principles, and most people were hard pushed to say what was driving Mr Jones.

On stage, the body language of Mr Jones seemed to say he did not want to be there but, once in front of the microphone, he was energised.

Mr Robertson ticked the sentimental boxes and Mr Cunliffe made a good fist of reminding the more than 250 people present that he had spent time as a student in the city.

After the media were excluded, the men answered 15 questions, with Mr Cunliffe seeming to win the popular vote.

In question time, Mr Cunliffe was very open about his family, citing his sons as his proudest achievement and expressing the love he had for his wife, Karen.

He realised he would see less of them if he became leader but it was a sacrifice he was prepared to make. Mr Robertson and Mr Jones mentioned their families in passing in the open session.

Mr Robertson made sure people remembered his life in the city and the fact he was speaking yesterday just 400m from where he was brought up.

His mother was in the audience and he spoke emotionally of the values she instilled in him and his brothers.

''Under a Labour Party led by me as prime minister, my commitment is Dunedin will never be abandoned again. You have my word,'' he said to rapturous applause.

All three men spoke of Dunedin becoming an innovation hub or capital, with Mr Jones wanting to leverage off research being carried out at the University of Otago and building on philanthropy for which the region was renowned.

Mr Robertson talked of the job losses from Hillside and the planned loss of jobs from Invermay and the need for a ''hands-on'' Labour government to ensure full employment.

However, it was Mr Cunliffe who had paid a visit to Invermay before the meeting and he spoke passionately about Dunedin's prosperous future being around becoming the ''Oxbridge'' - the Oxford and Cambridge Universities - of the South.

It was Mr Cunliffe who delivered the best quote of the day: ''Labour has underestimated John Key. I won't. I have his number and he knows it.''

Former Labour MPs Stan Rodger and J. B. Munro were hugely supportive of the process of selecting the new leader whereby the party had 40% of the vote, caucus 40% and union affiliates 20%.

The days of the caucus electing a leader and announcing it to the membership were gone, he said.

''How else could you get a crowd of Labour people out like this on a Sunday?''