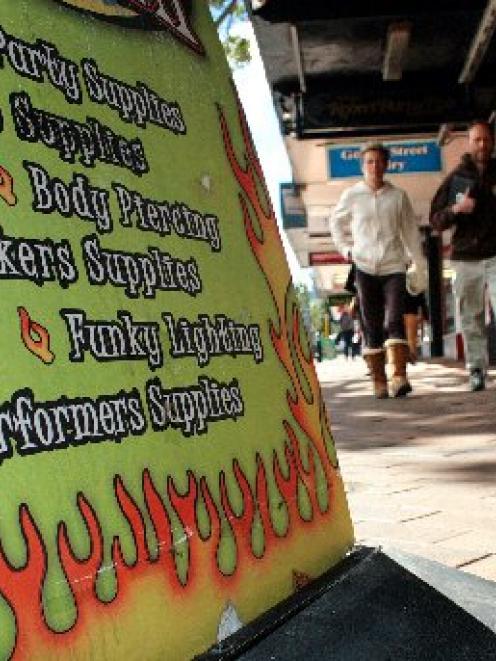 A shop selling 'legal highs' advertises on a busy part of George St in central Dunedin. Photo by Dan Hutchinson
The Government has passed legislation that allows the Dunedin City Council some control over the sale of psychoactive substances like party pills and synthetic cannabis.

Almost six months has passed with no new rules from the council and now Government MPs are asking why not. Star reporter Dan Hutchinson asks what is holding things up.

The Dunedin City Council is being told to ''get off their butts and get moving'' on policies to control the sale of psychoactive drugs.

Dunedin-based National MP Michael Woodhouse has accused Mayor Dave Cull of ''publicly hand-wringing'' over the issue, which has drawn a strong response.

Mr Woodhouse said the council had been given the tools to control the number, nature, location and opening times of retailers selling psychoactive substances.

''It is no accident that two or three [retailers] are deliberately located in areas where people are extremely vulnerable to this stuff - and I am talking about our mentally ill,'' he said.

Mr Cull said the process was flawed because although the council could develop a policy, licenses were issued to retailers by a government organisation in Wellington not bound by the policy.

''It not only doesn't make sense, it is inconsistent with controls that have been put in place and seem to work for gambling and alcohol.''

Council liquor licensing and projects officer Kevin Mechen has drafted a Locally Approved Product Policy (Lapp) to regulate psychoactive substances, which he said the council would consider in about two weeks.

He said the council could not prohibit the sale, so it had to work out ''where it [psychoactive substances] could be sold with the least amount of damage''.

Hamilton City Council recently restricted sales of legal highs in a policy that was now the subject of a judicial review. Mr Mechen believed many councils were waiting to see the outcome of that review.

However, Mr Woodhouse said the review simply looked at whether the right process was followed and the Dunedin City Council did not have to wait.

''There is no good reason for them to quiver behind the possibility of legal action as they appear to be doing and I maintain my call to them to do what the community has asked them to do and that is to regulate the location of these outlets.''

Mr Cull said the council would be working ''prudently and economically'' so it did not waste money ''trying to plug holes in inadequate central government legislation''.