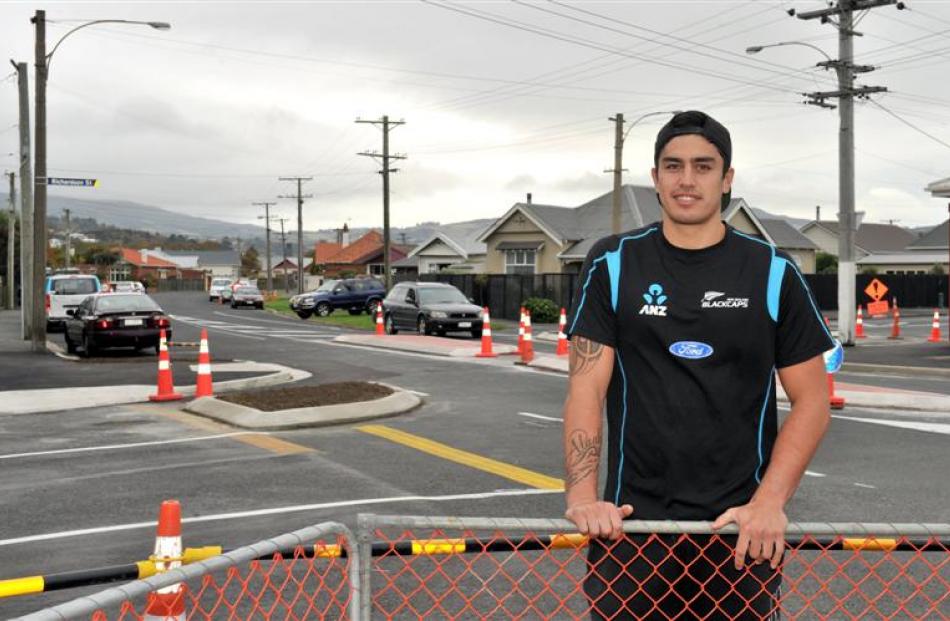 Coughtrey St resident Tipene Friday stands at the intersection of Coughtrey St and Hargest Cres, in St Clair, where the council has put in traffic islands to slow traffic. Photo by Linda Robertson.

The Dunedin City Council no longer has a ''firm'' schedule for the controversial $6.07 million South Dunedin cycle network after learning from past delays.

This comes as construction on the network happening now, or expected to begin soon, was work previously scheduled for last year.

Council transportation group manager Gene Ollerenshaw acknowledged the work had taken longer than expected, saying the council was no longer working to a firm schedule.

''We have come to learn that whilst we have got some targets, it's unrealistic to have a firm schedule because there are so many unknowns.''

The timeline on the council's website - dated to August last year - said the last of the work was scheduled for this year, but Mr Ollerenshaw now said the network was expected to be finished ''some time'' next year.

The work was taking longer than originally expected, in part because the council was spending more time listening to residents' concerns.

''It's better to take the time to get the final design right and so we are spending more time on consultation, more time engaging with the relevant groups.''

A combination of improved consultation and a higher level of awareness about the work under way meant the council was receiving fewer complaints from residents unhappy with the work.

Residents spoken to in Coughtrey St, St Clair, where the council was putting in a cycle lane and traffic islands to slow traffic, were split on whether they supported the work.

Tipene Friday said the work was a ''shambles'' and questioned how many people would actually use the cycle lane.

The traffic islands on each side of the street at the Hargest Cres intersection made the road far too narrow and he had seen drivers not being able to make the corner without driving on to the islands.

When the Otago Daily Times visited yesterday, tyre marks were visible on the traffic islands.

Kay Clark supported the work, saying it would slow traffic and make the street safer.

Kate Heer said she would reserve her judgement until the work was completed, but if she had to choose one way or the other, she was against the work.

''The benefit of it is that it slows the traffic down considerably, which is good with the school [nearby], but the bad side of it is it's so tight to turn [into the street].''

''There is going to be cars having scratches and crashes.''

This route was a combination of dedicated cycleway and ''quiet streets''.

The other route being worked on was via Tedder St and Fingall St Over the next three or four weeks, construction would start at the following intersections. -