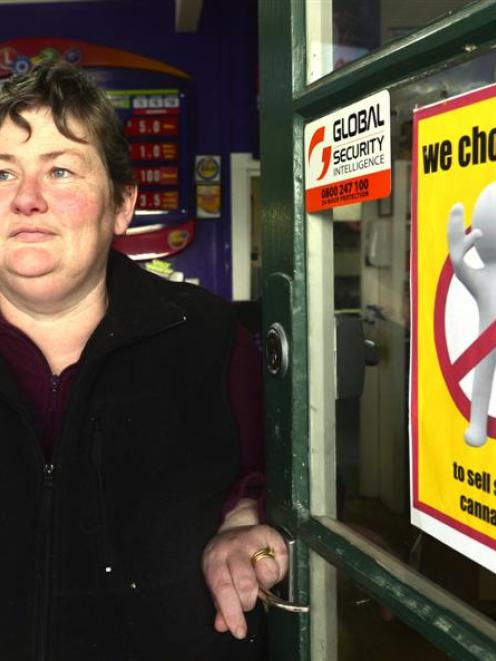 Sharon Mackenzie refuses to sell synthetic cannabis in the Tahuna Motor Camp Store she owns with husband Allan, despite the 100% mark-up on packets. Photo by Peter McIntosh.
Some Dunedin dairy owners are making nearly $1000 a day in profits from selling synthetic cannabis, and will continue to do so until legislative change takes effect in August, police say.

And it is such profit, from mark-ups of 100% or more, that is used by ''aggressive'' suppliers to strongly promote their products to retailers, the owners of a Dunedin dairy say.

Tahuna Motor Camp Store owners Sharon and Allan Mackenzie are staunch opponents of synthetic cannabis, but receive calls from suppliers every week or two and on Thursday were sent an inventory of new products and order sheets from an Auckland wholesaler.

Mrs Mackenzie said those supplying synthetic cannabis were ''aggressive'' in their approach to retailers and did not take no for an answer.

In the 11 years she and her husband had owned the store, synthetic cannabis was the only product they refused to sell, despite potentially huge profits.

''I always tell suppliers we have no interest in selling it, but they won't leave us alone. They get quite aggressive on the phone, asking why we won't sell it and emphasising how much money we can make off it.

''To be honest, there is good mark-up in it, but no way; it's not worth it. Money's one thing but customer health is more important,'' Mrs Mackenzie said. St Kilda residents were concerned about the damage synthetic cannabis was causing in the community.

The shop owners knew other retailers were making ''a lot'' of money from it, but were determined to boycott it for the safety of residents, customers and staff.

Since 2011, there have been seven aggravated robberies of Dunedin shops where synthetic cannabis was the sole target.

Mrs Mackenzie said instead of losing customers the store had gained business from being synthetic cannabis-free.

''A lot of people are really happy we don't sell it. Every day a couple of people ring or come in asking if we sell it and we turn them away, but overall we probably get more business because people support our decision not to sell it,'' she said.

Senior Sergeant Chris McLellan said Dunedin's synthetic cannabis retailers each sold between 40 and 90 packets a day, which they bought from manufacturers for $10 and sold for $20.

Aggressive marketing by manufacturers had increased the number of stores selling it, he said.

''Their marketing is solely based on profit and providing very little information to retailers about ingredients and safety warnings, which is dangerous.

''In larger cities around the country, retailers are selling in excess of 150 packets a day.''

The key objective for police was to get synthetic cannabis off shelves, and make sure those intent on selling it were aware of the risks.