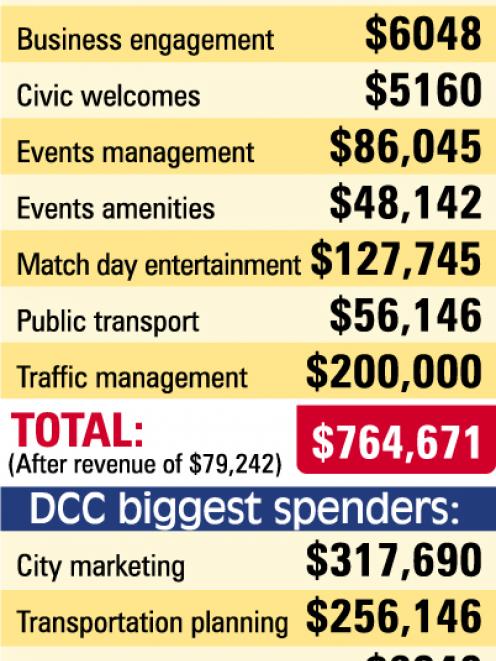 Click on graphic to enlarge.
The Dunedin City Council's bill for the Rugby World Cup has more than doubled to $760,000, but deputy mayor Chris Staynes insists the inflated amount is money well spent.

That was partially offset by $79,242 received from the Ministry of Economic Development and councils involved in the Spin it Wide campaign, meaning the DCC bill stood at $764,671, the figures showed.

The council originally set aside $200,000 over two years to meet tournament costs, and had planned to draw on other council budgets to help meet extra costs.

However, last August, a month before the tournament began, the council's then-RWC co-ordinator, Debra Simes, said the council budget was "a little light", and the actual cost was expected to be $350,000.

Contacted yesterday, Cr Staynes, chairman of the council's RWC steering group, said the initial budget allocation had been "pretty inadequate and not very well thought through".

He also admitted he was not aware exactly how high the bill had climbed. Departments were responsible for their spending, with the steering group keeping an overview of "more significant sums".

However, he defended the size of the bill, saying it was important to provide for visitors and to have made the most of the economic and promotional opportunities the tournament presented.

The council also had to expand its preparations after the Christchurch earthquakes, which meant Dunedin was awarded extra responsibilities, including hosting the England team, extra fans and another match, he said.

"We certainly didn't go out and spend money unnecessarily, but at the same time we were aware we had to deliver a really good experience.

"In some cases we put a bit of pressure on some departments to clear space in their budgets to assist with the running of the Rugby World Cup, but overall I think we were pretty frugal."

Council city strategy and development general manager Sue Bidrose said she had always expected the cost to be higher than $350,000 and insisted: "There is no budget blowout.""My anticipation is [the bill] would have been perhaps 10% lower than it was, as a rough guess."

Cr Staynes said there was an opportunity cost, with roading money spent on tournament traffic management plans not available for repairing potholes, for example.

The same was true for other budgets, although the tournament was a "major" marketing opportunity for the city, meaning using some of the marketing budget made sense, he believed.

"The city had never had as large an event occur in its history, probably right back to the [New Zealand and South Seas] Exhibition.

"It was a very large event; it brought a lot of people to the city; it brought quite a bit of money in ... It put Dunedin on the map worldwide," Cr Staynes said.

The spending details came in a council staff report to next week's finance, strategy and development committee, released to the ODT four months after a request under the Local Government Official Information and Meetings Act 1987.

The report showed the council's city marketing department contributed the most, spending $317,690, followed by transportation planning, which spent $256,146, most of it on traffic management around the city.

The report said Dunedin's spending amounted to $191,167 per match, which was likely to compare favourably with spending by other councils yet to release their figures.

It also pointed to the economic boost across Otago generated by the tournament, with Paymark figures showing hospitality spending increased 16.6%, to $353,809, in Otago during the three days either side of Dunedin's first match on September 10, compared with the same time last year.

Other benefits included a publicity boost for Dunedin and its stadium in front of an international audience, improved infrastructure - including banners and recycling bins - relationship-building between the council and other organisations, capacity-building for hosting future events, and a boost to civic pride, the report said.