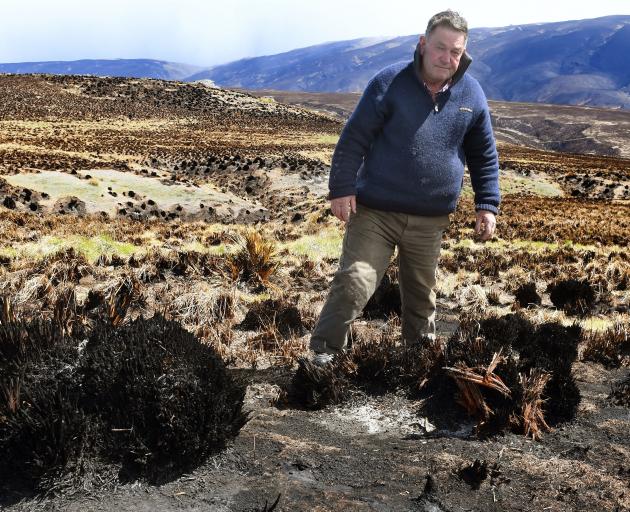 Standing by the remnants of the 5000ha blaze and campaigning for change to prevent future fires is farmer Jim Macdonald, of Clarks Junction. PHOTO: STEPHEN JAQUIERY
The Dunedin City Council and Department of Conservation need to be held to account over the large blaze near Middlemarch earlier this month, a farmer says.

Beginning on November 9, the fire covered more than 5000ha, and more than 10 helicopters and hundreds of firefighters worked to extinguish it.

Mt Gowrie Station farmer Jim Macdonald - who owns 2400ha of land at Clarks Junction northeast of the site of the fire - said the DCC and Doc needed to make changes to their approach to land management.

"I've been farming this land for 54 years and this was the biggest fire by a country mile.

"It was only a matter of time - it's been building since Doc took over the land and stopped grazing," Mr Macdonald said.

"There needs to be change from both Doc and the DCC and actual research on the risk of fire in large areas like Te Papanui."

"This means we do not mow the grass and do not allow stock on the land, as stock has the potential to contaminate the water supply."

The council was aware that allowing the tussock to establish created a fire risk, he said.

"We haven't had a significant fire like this for several decades.

"In light of the recent fire we will review the associated risk of fire and weigh it against the need to provide a clean supply of drinking water."

"At Te Papanui, tussock land is a high-hazard fuel, which is why fires are not permitted."

Mr Hopkins said further research was needed to better understand and identify areas where prescribed burning might be of benefit in enhancing ecosystems or reducing fuel loads.

"In the case of Te Papanui, grazing and fires are both significant negative impacts and are not considered suitable options for fuel reduction or enhancement of tussock land in its natural state."

Mr Macdonald said the land where the fire was had been grazed but that stopped in about 2002 when Doc took over the land.

Bringing back controlled burning and grazing of the land would keep the fire risk in large areas low.

"It all used to be maintained and you would very seldom have a fire get out of hand. Since then it's been a time bomb waiting to go off."

Mr Macdonald said the fire was preventable and should be a wake-up call for change to happen.

A fire needs a source, where and what was this source. Secondly, a lot of fires this spring and have all those sources been identified and people brought to account, I haven't heard. I think it is strange that with this fire is spoken of but nothing said of the other spring fires.

Good on DCC for not allowing stock near the water catchment areas. Would hate to see that change because of potential fire risks.

In this world of climate change and huge fires I would prefer grazing animals (goats?) on the land rather than controlled burn offs

1100ha of land, fenced off, filled with angora goats and rabbits. Fresh meat, milk and cheese supply, fur jackets for the tourists and nothing left to burn ever again. DOC could garner an income with some thought. Did someone say RABBITS!!!