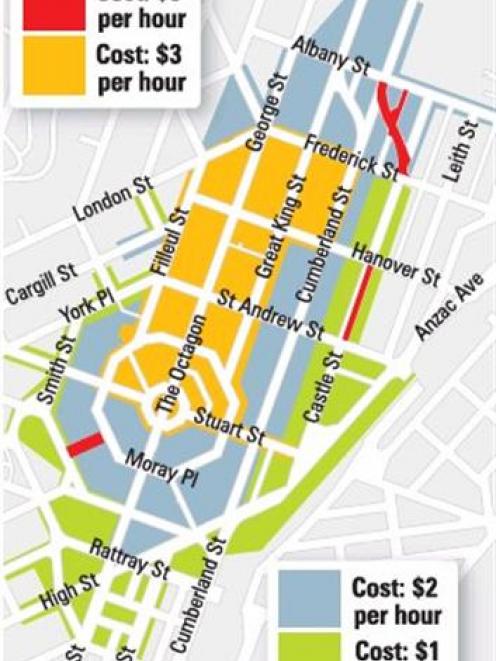 DCC parking plans. ODT graphic.
More $5-a-day parking in Dunedin, and changes to parking in the St Andrew St and Exchange areas, are the main outcomes of a review of the city's controversial parking strategy.

The Dunedin City Council appears to be making every attempt to make sure the changes will not again prompt the cries of outrage the strategy caused when it was introduced last year.

This time, deputy mayor Syd Brown said, every building owner and retailer in affected blocks was asked to get together to decide on changes that met their needs, present them to the parking working party, then all sign up to the changes before the council would consider them.

While "you will never get total agreement", as everyone had different requirements, Cr Brown said affected parties had got involved in the process.

In July, Cr Brown announced a review of the council's parking regime, which he said could result in "tweaking" in some areas.

The review would consider data from the city's parking machines to see if the system was meeting the needs of the community.

The working party was set up to review the strategy, introduced in July last year, after it became the target of protest and criticism from city businesses, with complaints it had led to an alarming drop in trade in the central business district.

Changes were made later in the year, including lowering parking charges and changing time limits, and the furore over the issue died down.

The latest recommendations of the working party, which it has the power to put into practice, included extending $1-an-hour, $5-a-day parking to most of View St, and the same to Gowland St, Ethel McMillan Pl, and the eastern side of Castle St between St Andrew and Hanover Sts.

Not all outstanding issues had been resolved, though.

The changes in St Andrew St would address difficulties drivers had accessing parking with restricted turning from George St, and problems in the Exchange related to goods deliveries to businesses, and were not major, Cr Brown said.

Parking machine data had shown most of the on-street car parks in the city had good patronage, with a turnover period in the inner city of 30 to 40 minutes per stay.

But they had shown "very, very low occupancy" for the areas that were to change to $5-a-day areas.

"The car-parking buildings, which are the most cost-effective areas in the inner city to park, have shown a decline in patronage."