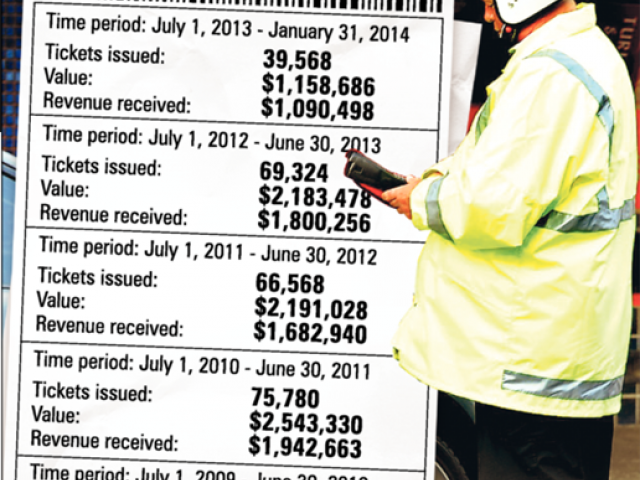 Motorists in Dunedin continue to fork out for parking fines.

Dunedin City Council parking officers are issuing more tickets, not fewer, despite a continuing charm offensive in the city.

Dunedin City Council parking infringement notices are to double in size, on August 1, from the current 15cm tickets to new 29.5cm tickets, under changes initiated by the Ministry of Transport.

The new director of the Dunedin Public Art Gallery says he is looking forward to working with one of New Zealand's best art collections.

Sick of discarded parking receipts littering the floor of your car, the gutters and Dunedin's shoreline?
Mornington residents and retailers are urged to detail their parking issues with the Dunedin City Council so proper consultation can start.

Mornington business owners may relocate due to parking woes in the residential suburb.

The Otago Regional Council has decided on a "pathway" towards solving its accommodation problems which includes providing for a temporary council chamber in its Stafford St car park.

Dunedin's tertiary sector will soon have about 100 new free or lower-cost car-parking spaces, following the demise of what was supposed to be an environmentally sustainable system designed to reduce emissions and take the pressure off parking.

The University of Otago's move from a St Andrew St car park to the Forsyth Barr Stadium has opened about 200 extra parks near central Dunedin.

The importance some Dunedin drivers place in saving $2 has been made abundantly clear, following the turnaround in the fortunes of a city car park.

Parking tickets might be here to stay, but the desperate hunt for coins to feed the meter could soon be obsolete.

The Dunedin City Council is buying a privately run car park offering cheaper fees and increasing them to match its own, but a council manager denies the action is monopolistic.
Motorists are set to pay more to park in central Dunedin.

In six weeks, Dunedin residents will have the opportunity to have their say on the city's future at the 2010 local government elections. Dunedin City Council reporter David Loughrey looks at the council's record in the last triennium, considers the issues that will dominate the election, and asks: Does the council listens to its citizens?

More $5-a-day parking in Dunedin, and changes to parking in the St Andrew St and Exchange areas, are the main outcomes of a review of the city's controversial parking strategy.

The chairman of the Dunedin City Council's finance and strategy committee has apologised after incorrectly claiming a $2 million profit from parking meters was ring-fenced.

A review of the Dunedin City Council's parking regime may result in "tweaking" in some areas, deputy mayor Syd Brown said yesterday.

Any discussion about city parking, and therefore any policy on the matter, should return to the underlying reason for restricted and paid parking.