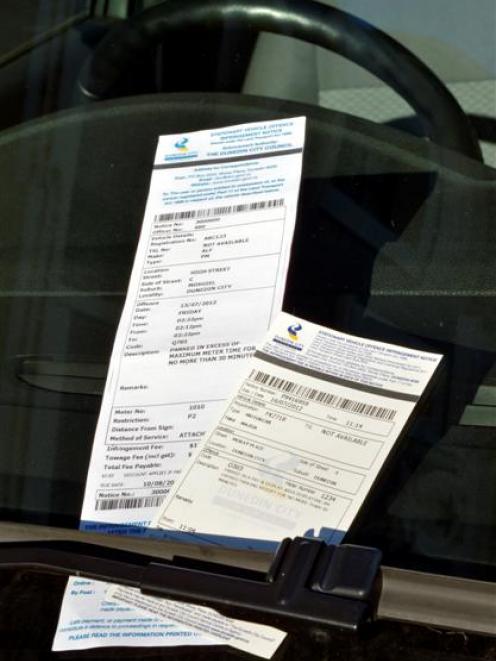 Photo by Gerard O'Brien.
Dunedin City Council parking infringement notices are to double in size, on August 1, from the current 15cm tickets to new 29.5cm tickets, under changes initiated by the Ministry of Transport.

However, motorists need not panic - the size of the fine will stay the same.

Dunedin City Council parking services team leader Daphne Griffen said the change was being introduced by the ministry to allow more information to be printed on the back of the tickets.

That included terms and conditions, obligations, payment options and legislation under which the ticket was issued.

It would also include details of remedies available to motorists wanting to challenge the legality of any ticket.

The change was being introduced to councils throughout the country, bringing them into line with other agencies, such as police, Ms Griffen said.

A ministry spokesman said the new tickets were designed to close "loopholes" some motorists used to challenge tickets.

Current infringement notices contained basic information about the offence and how to pay, but reminder notices mailed to motorists' addresses contained more, including a person's rights and the consequences of not paying, the spokesman said.

A person who did not receive the reminder notice - perhaps because they had not updated their address information - had options to challenge the ticket, the spokesman said.