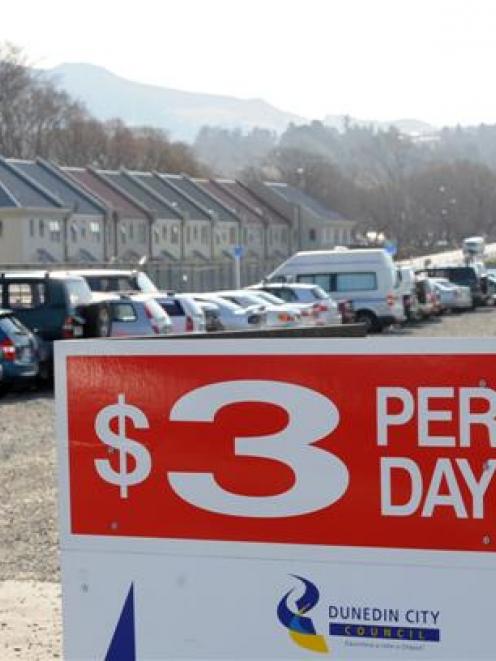 The St Andrew St car park in Dunedin, which quadrupled its occupancy rate after its daily fee was dropped from $5 to $3. Photo by Stephen Jaquiery.
The importance some Dunedin drivers place in saving $2 has been made abundantly clear, following the turnaround in the fortunes of a city car park.

A drop in price has quadrupled the occupancy rate of the St Andrew St car park, and almost tripled the revenue the city council is collecting.

But while the benefits of dropping fees may be both evident and appealing, the council says it does not plan to start dropping prices at its other parking facilities.

Until earlier this year, the fee at the car park near the Dunedin Railway Station was $5 a day.

The situation occurred after the installation in May of cycle lanes in Anzac Ave resulted in a loss of on-street parking in the area.

Council infrastructure services committee chairman Andrew Noone suggested the St Andrew St car park be made free of charge as an interim measure, until new on-street car parking was established.

Not surprisingly, occupancy exceeded capacity during the free period, with "entrances frequently becoming blocked as more and more cars attempted to fit into the car park", a report to this week's planning and environment committee said.

The report, from council transportation planner Emerson Yeoman, said discussions between staff at the end of the free-parking period led to a decision to reduce the fee to $3 a day.

That decision led to occupancy increasing to an average of 63 cars a day, or 84%.

Asked yesterday if the success of the fee cut might lead to cuts at other car parks, council transportation planning manager Sarah Connolly said it would not.

The council's parking buildings had an occupancy rate of about 80% at peak times, she said.

"That's where we want them to be."

There had been a lower occupancy rate at a Great King St car park, but that fitted with the council's intention of having some spare capacity.

Development services manager Kevin Thompson confirmed the occupancy for the council's 12 parks - some of which were lease only, and others a mixture of lease and casual - was between 75% and 80%.

The St Andrew St car park, which had about 120 spaces, also had a slightly different role to other parks, being slightly further from the city, and used for commuters to take pressure off the nearby industrial area's parks.

The committee voted to confirm the fee at $3 a day, Monday to Saturday.