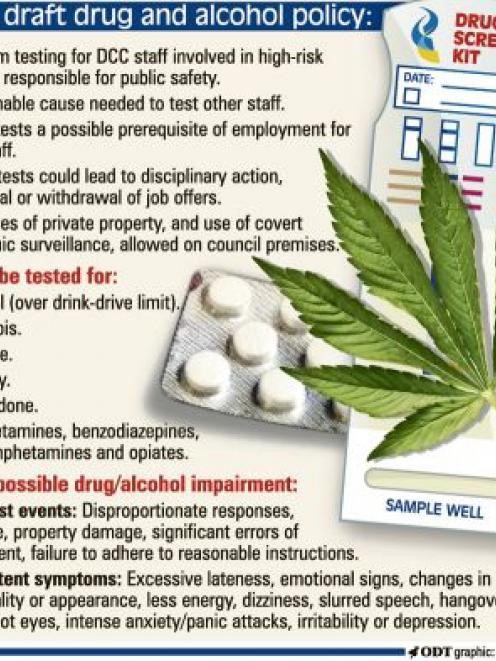 Random testing and the use of covert electronic surveillance could be among powers to be used by the Dunedin City Council to root out drug abuse by its staff.

Council staff are being asked to consider a proposed new alcohol-and-other-drug policy, which details procedures for random and targeted testing for inappropriate use of illicit substances.

The list of substances to be tested for include alcohol - over the legal drink-drive limit - as well as cocaine, ecstasy, cannabis and other illegal drugs.

A copy of the draft policy was released to the Otago Daily Times last week by council community life general manager Graeme Hall, who said the policy aimed to ensure key staff were "right on top of their game".

He was not aware of "significant" drug or alcohol problems among the council's 687 full-time equivalent staff, but the draft policy matched those of other major employers.

The council had an obligation to provide a safe workplace, already had general guidelines on prohibiting inappropriate alcohol and drug use and a programme in place to help staff with issues.

However, the new policy pulled the guidelines into one cohesive document, provided more specific instructions and spelt out in greater detail the council's power when it came to search and surveillance, Mr Hall said.

The draft allowed random testing for council staff working in safety-sensitive areas, such as those operating heavy machinery, and those responsible for public safety, such as lifeguards at Moana Pool.

Those failing tests would be stood down without pay until a clean test result was obtained, or dismissed if one was not received within seven days, and subjected to disciplinary action leading to written warnings.

Other staff could also be tested if there was reasonable cause to suspect they were impaired, the draft said.

Reasonable cause included outbreaks of violence in the workplace, but also excessive lateness, changes in personality or appearance, bloodshot eyes or intense anxiety or panic attacks.

Those failing tests would continue to be tested at random over the next year, and further positive tests - or more serious misconduct such as possession of drugs in the workplace - could lead to dismissal.

The policy would also allow the search of private property on council premises in some circumstances, and the use of covert electronic surveillance to catch those in breach of the policy.

Potential new recruits could also be tested as a condition of employment, with any job offer conditional on a clean result.

Refusal, or a positive test, would "impact on a manager's decision to offer employment".

However, the draft policy also stressed the aim was not to prevent private drug use - only to detect those impaired by alcohol or drugs while at work.

A cut-off level would need to be breached before the council took action.

"Just because there is a trace of the drug in your system, it does not necessarily mean the council will take action."

The random testing would be carried out by the New Zealand Drug Detection Agency to prevent managers picking on individual staff repeatedly, the policy said.

Mr Hall said the draft policy was not an attempt to establish a police state, but reflected "today's society".

"For some areas of council we don't want to be ... scaring people and that. But in certain areas where we've got to make sure we've got everyone's attention, particularly lifeguards at Moana Pool and in our waterworks area, then we've certainly got the ability to test.

"It's about testing when we think we've got something going astray."

The draft policy had been approved by the council's human resources department and executive management team before being sent to all staff for feedback earlier this month.

Mr Hall said it was hoped a final policy would be prepared for approval in February, once feedback was considered.