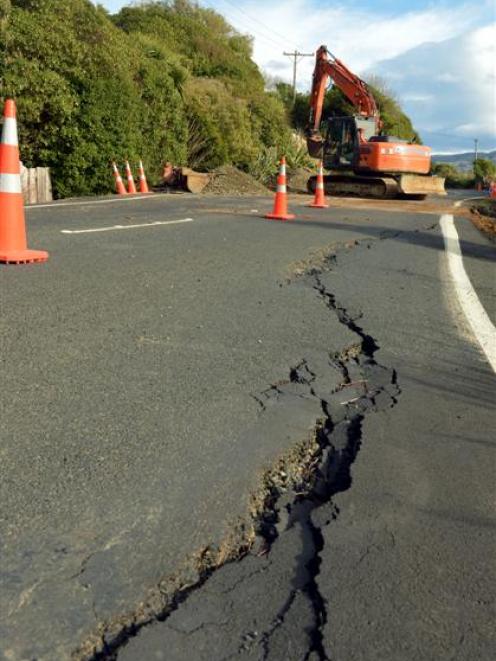 The warning came as work to repair another slip further along the Peninsula, in Harington Point Rd near Portobello, got under way yesterday, forcing the closure of the section of road to motorists for the day.

The closure meant delays and disruption for tourists and tourism operators alike as a detour sent traffic along Weir Rd instead.

Council network development and operations manager Michael Harrison said it was the kind of disruption that could be repeated, given the risk of further slips along the road.

Parts of Harington Point Rd were at risk of further damage, in part due to ''sidecasting'' construction methods used in the past along parts of the route, he said.

The method involved workers cutting into the bank and pushing material over to create a wider base for a road, he said.

''How well that's compacted and built is now what's given us some concerns and difficulties now,'' Mr Harrison said.

''There is the potential it [slips] could happen [again],'' he said.

Ongoing repair work at Turnbulls Bay was designed to repair three slips at intervals along the road, which was built on ''very unstable'' ground, he said.

It was only after work began that ground conditions at the site were found to be so bad, more extensive excavations and a larger retaining wall were deemed necessary.

That had pushed the timeframe to complete the project out from May to September, and the cost had risen from $1.51 million to about $2.5 million, he said.

The retaining wall now close to completion was a ''very, very significant'' structure but the council had little choice, he said.

''It's not just repairing a couple of little slips ... If we hadn't done this full wall now, we would've been back repairing the pieces in between after that last storm.''

Contractors closed the road yesterday while replacing damaged culverts but hoped to have one lane open while completing repairs this week, he said.

The road would be left with one gravel lane while its stability was monitored before being resealed in late summer, he said.

The cost was not yet known but was expected to be at the ''lower end of the spectrum'' of repairs arising from June's downpour, he said.

More slips could be expected in the area, given the mix of variable ground conditions, earlier construction techniques, changing weather patterns and crumbling vegetation and banks, he agreed.

''With the terrain that we have, and the materials that we're dealing with, and the demands on those roads, if we have similar events I'd suggest there's no reason we wouldn't be getting similar sorts of results.''

However, keeping the road open to tourists and residents alike was a high priority, he said.

''We will throw every effort we can into actually keeping that road open.''

Mr Harrison was upbeat about the latest progress at Turnbulls Bay, saying the work remained on schedule to be finished next month.

The final touches were being added to the retaining wall, which would be followed by construction of a shared path, a safety fence and reinstatement of the area, he said.

''It's progressing to plan - the latest plan - and no new issues have come up,'' he said.