By Chris Morris
0 Comments
A last link to Dunedin's maritime engineering history - the former Sims Engineering building in Port Chalmers - is facing another long, cold winter exposed to the elements, as calls mount to save the old structure.

The building, parts of which date back more than a century, has been locked and abandoned since its asbestos roof was removed in 2017.

The council has consulted the community on options for its future, but was awaiting a feasibility report from Opus before deciding its fate.

That worried Dunedin building owner Bill Brown, who has called for the building to be saved and even put forward his own restoration plan.

Bill Brown is urging the Dunedin City Council to step in and save the former Sims Engineering and Stevenson and Cook building in Port Chalmers. PHOTO: GREGOR RICHARDSON

This week, Mr Brown - who previously restored the Angus Motor Building in Princes St - said the council had to do more to protect an important piece of the city's heritage.

The building was not a listed heritage building, but had formed part of the Stevenson and Cook engineering complex from the early 1900s and was later a base for Sims Engineering.

"This building is the very last building in the whole of Dunedin of that era of our maritime industrial history. The rest of them have all gone.

"If this building was in town ... there would be an uproar," he said. 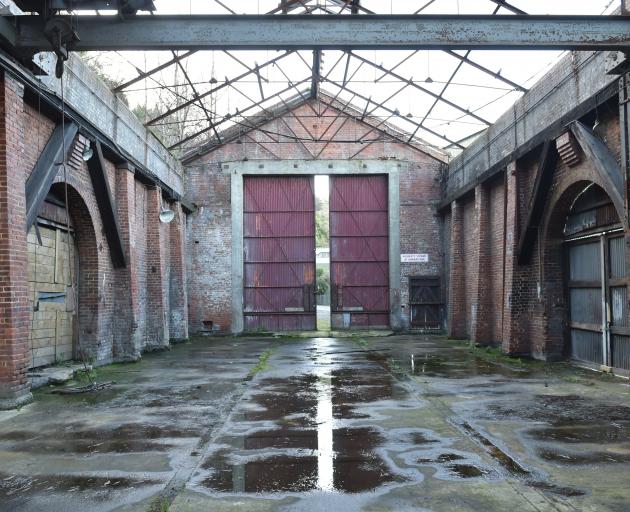 The brick and timber shell of the old building has been exposed to the elements since the asbestos roof was removed in 2017. PHOTO: GREGOR RICHARDSON

The council would carry other costs, including removing trees and stabilising land on a bank above the building, rates relief and a heritage grant, but would also benefit from rent and rates paid by any new tenants, he said.

Once finished, ownership could transfer back to the council, which could grant a long-term lease for commercial uses, such as a cafe, and a gallery showcasing the building's industrial architecture and history.

Foundry workers take a break inside the former Stevenson and Cook — later Sims Engineering — building in Port Chalmers. PHOTO: SUPPLIED
Mr Brown had presented the idea to council staff and the West Harbour Community Board, but remained concerned by delays deciding the building's fate.

The building was likely to be deteriorating and the council - having been vocal about the neglect of privately owned heritage buildings - needed to act, he said.

Council property services group manager Dave Bainbridge said the building was being regularly monitored and there was no evidence it was deteriorating.

The council expected to hear back from Opus by September on the feasibility of options for future uses of the building, including Mr Brown's.

The situation was complicated as the building was on a public reserve and commercial uses were prohibited.

However, a development that benefited the reserve - such as a cafe or a gallery - might yet be acceptable, he said.

Even so, questions remained over the feasibility of Mr Brown's plan and demolition was still "definitely a possibility".

Among the hidden costs was a requirement for an asbestos clearance certificate, deeming the site was safe, which would require "significant remediation", he said.

"We see any kind of upgrade of that building would cost you in the millions."

Despite that, Cr David Benson-Pope, chairman of the council's planning and environment committee and heritage advocate, said Mr Brown's restoration plan appeared to have "merit".

He was seeking more information, but believed the complexities of the reserve status could be overcome by revoking its classification.

"Clearly, it's time the council actually had some discussions and put some thought into the future of the site."

Cr Aaron Hawkins - a Port Chalmers resident and West Harbour board member - said he, too, wanted to see a new use for the building.

It "clearly has significance in terms of local social history" and the board was seeking assurances that the building was not at risk from the elements.

"If we can't get those assurances, then that obviously makes it more urgent that this be resolved, sooner rather than later," Mr Hawkins said.