Consent given for harbour golf challenge 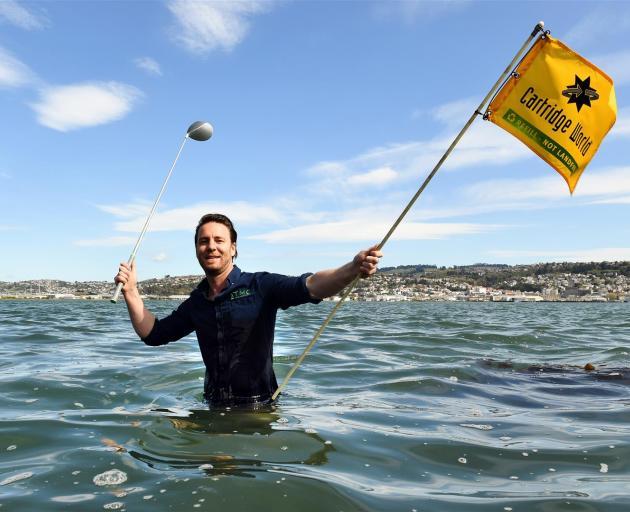 Mr Graham plans to use a small reserve south of the Vauxhall Yacht Club as the base for his golf challenge, kayak and bicycle hire and coffee and food van business.

Golfers would aim for an 8m by 12m floating pontoon positioned 95m into the harbour, and stood to win a $10,000 prize if they scored a hole-in-one.

Otago Regional Council staff would not release a copy of the consent decision yesterday, saying they wanted to give Mr Graham time to read it first.

Mr Graham said the decision left him ''pretty blown away'', but positive, after nearly three years of hard work and expense developing the concept.

As a ''local boy'', Mr Graham said he wanted to deliver something that would benefit Dunedin and Otago Harbour.

''A lot of time and energy went into testing ball retrieval and looking at other similar operations, like in Taupo, and researching environmental effects by employing experts in each field.''

There was now a ''massive'' task ahead, engineering the required pontoon, buying equipment and training staff, Mr Graham said.

It could open this summer, but was more likely to be ready for the following summer.

Critics had argued the attraction risked polluting Otago Harbour with golf balls, despite plans to recover them as part of the operation.

Others also raised noise and public safety concerns. The Otago and Otago University rowing clubs worried about disruption to their morning training sessions.

It had the support of the Vauxhall Yacht Club and Ravensbourne Boating Club, and others argued the venture would ''inject vibrancy into an under-utilised part of the harbour''.

Great decision. The fun police won't like it though.

A three year battle to get "permission" to hit a golf ball into the harbour ... How pathetic can you get ??

Peter, I apologise for my sarcasm in advance and sincerely wish you all the best in your future endeavours.

I’m sure Prez Don gave his mate Dave the “heads-up” and conveyed his concerns that one of your stray heat-seeking golf balls would put one of his Navy’s latest $8.4b Nimitz-class, nuclear-powered, aircraft carriers in eminent danger of terrorist attack whilst docked in Andy Bay Inlet; This being the only reasonable explanation for the Council to justify such a delay in consent approval … well the best one they can think of now that I’ve mentioned it.

Obviously your consent application was taken extremely seriously … possibly even at AAA+BS by the UN Security Council ... before they gave Dave & the team the all clear to give you his consent.

Again, I wish you all the very best for your future BILLION dollar enterprise … if the 8% water rate increase doesn’t put you in the red within the first year … I have many contacts in the SEA region and I assure you that I’ll promote your business at every opportunity.