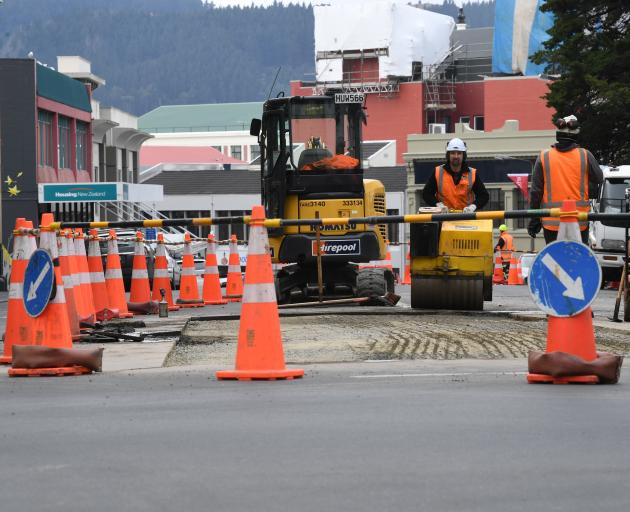 The sight of Downer contractors working on Dunedin’s Southern Motorway will soon be a thing of the past. Photo: Stephen Jaquiery

Fulton Hogan appears to be in line to secure a major Dunedin City Council contract, potentially worth more than $100million, while rival Downer seeks new roles for up to 30 affected staff after missing out.

DCC infrastructure services general manager Simon Drew yesterday confirmed the council was in negotiations with a "preferred contractor" for the new 10-year roading maintenance contract, which would come into force on May 1.

He did not name the company, but the Otago Daily Times was told yesterday Fulton Hogan was the preferred contractor.

Fulton Hogan had held the previous contract until 2016, when criticism of its performance cleaning mud-tanks across the city — which was disputed by the company itself — was followed by the decision to award the contract to Downer.

At the time, it was a three-year contract worth $45million, and losing it prompted Fulton Hogan to make about 12 staff redundant.

Yesterday, Downer regional manager Anthony van de Water confirmed in a statement the company had now missed out on retaining the contract.

The outcome affected about 30 full-time staff, who were said to be "disappointed", but Downer was "working with those impacted ... to help reassign them to roles within the wider Downer, Spotless and Hawkins family", he said.

"Over the past four years, the local team has serviced this contract well and I'm proud of their commitment and service to the local community during this time," Mr van de Water said.

It was not clear yesterday whether affected staff had been made redundant, or whether those offered new roles would be required to relocate to other centres, but there were "a number" of roles available in Dunedin and the wider region.

Mr van de Water said the company would continue to work with the DCC, as an "important" customer, on other contracts and transport, infrastructure and facilities-related projects in the city.

Mr Drew said the council’s contract discussions remained commercially sensitive for now, but confirmed it had been extended from three to 10 years.

The council would also not be drawn yesterday on the total value of the new 10-year contract, but the extension suggested the value could have increased to more than $100million.

Mr Drew said the change in length acknowledged that contractors "need to make significant investment in equipment and plant that provides more value to the city by being paid for over a long-term contract".

The new contract would begin on May 1 and include a variety of tasks, from road and footpath resealing to cleaning mud-tanks, fixing potholes, street cleaning and other duties — across 1000km of sealed and 700km of unsealed or gravel roads.

I wonder if the small issue of keeping a suction tanker in Dunedin has been addressed. If storms occur then sometimes drains need to be cleared quickly. That is impossible if the suction tanker is in Christchurch.
Or is this just another case of DCC forgetting the painful lessons learned just a few years ago? I have to admit, that is one thing DCC are good at.

Lets hope the contract is water tight to at least 50 fathoms, and the DCC have a check off list of the criteria that has to be met. failure to do so means nothing has been learnt and Dunedin will keep going back wards and the fat cats get fatter.