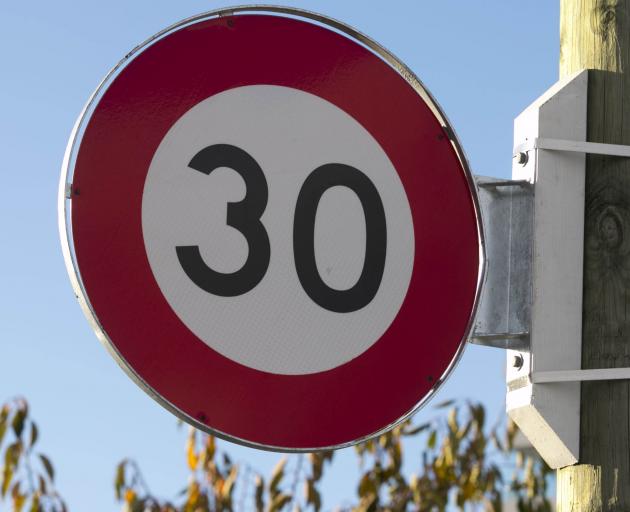 Photo: Newsline/CCC
Slower speeds through the city could save lives, the Dunedin City Council says as it proposes a slew of lower speed limit changes.

Due to the high numbers of pedestrians and cyclists using Dunedin’s city centre, speed limits need to be lowered in the central city, the council said in a statement last week.

Council transport group manager Jeanine Benson said lowering the speed limit by 20kmh to extend the 30kmh zone in the city centre would make a significant difference to pedestrian and cyclist safety.

"Behind every one of these statistics is a son, daughter, mother, father, friend or other members of our wider community," Ms Benson said.

"We’re proposing to extend the 30kmh speed limit in the city centre because of the high numbers of people walking, cycling and using scooters.

"If you’re a person walking or cycling and you get hit by a vehicle travelling 50kmh, you have an 80% chance of dying or being seriously injured.

As well as the proposal to drop the speed limit through the central city, six Otago Peninsula town centre roads, and 15 rural roads have been identified as requiring slower speeds.

In the four-year period 2015-19, 28 people were killed and 369 seriously injured and the statistics were getting worse each year, Ms Benson said.

The proposals follow a speed management review by the council to determine safe and appropriate speeds across its roads.

The DCC transport department have gone off the rails. When will the CEO stop the lunacy? It started with speedbumps on Maori Road and has only got more wacky each month. Nanny-state is strong with this council

Another so-called cost-benefit analysis that focuses only on uncertain benefits while ignoring certain costs.

Ban all cars. Then no injuries will occur- duh!! Then we can move into our caves without electricity using donkey drops for toilets. Brought to you by the regressive Greens DCC.

If "green" minded people cannot stop the economy to bring it to its knees because they think the Industrial Revolution was the worst thing that ever happened, they at least can slow it down. Just who we need in charge of our country eh?

what is the real reason? But Dunedin has cycles lanes!!! that is lower than the speed limit past a school. does that mean people speed up past a school or they have go disembark there car and push it past the school She has been in the job since Feb. watch out and trying to make people feel guilty that they drive by saying "Behind every one of these statistics is a son, daughter, mother, father, friend or other members of our wider community,"
https://www.odt.co.nz/news/dunedin/dcc/new-transport-group-manager-dcc

Show the stats of accidents over a 5 year period and if they were a mother daughter son etc,

And the stats were mentioned in the article: 28 killed, 369 injured between 2018-2019. Isn't that reason enough?... People killed and injured. Not just cyclists. And it is only to easy to dismiss those numbers. But, as noted, each person is not an island. They are part of a web of connections: son, daughter, mother, father. Or do you not think people killed and injured by motor vehicles are? Here's a thought for you: Think of all the people you know. Friends and family. Now think which ones you wouldn't mind seeing killed. Pick 28. Pick another 369 to have injured. Too many? Perhaps half it. 14 killed. Still too high isn't it? One is too high.

30km/h is quite fast enough to get around town. In fact, I'd be surprised if the average speed through town with lights, parking, etc, is actually that high most days. And if it saves lives - and it does - then I'm all for it. Who can honestly say "I'm happy to kill a few people so I can drive at 50km/h and save myself a few minutes."

AJ, your comment "But, as noted, each person is not an island. ".
Brings to light a significant problem that should have been addressed a long time ago. When a pedestrian crosses a road, they are at that time a 'road user'. In that postion, digital media use should be an offence. Fact is, people aren't taking responsibilty for their actions. And in fact, due to their ignorance, they are placing that responsibility on the shoulders of other road users. Just as a distracted driver should be heavily fined, so should those using the roads by other means while distracted.
I couldn't count the times that I have had pedestrians in the early hours walk right out in front of me wired up to digital media, they see themselves as an 'island', disconnected from their immediate and often dangerous surroundings.
You're quite right AJ, in the density of the city, 50kph is almost unachievable. Drivers should be driving to the conditions, as the 'Road Code' states. However, we all seem to be ignorant and in a hurry, so sadly we need stricter rules, so here come the 30kph signs. We can't blame the Council, we have created the problem, and the deaths.

Let's go to DCC website and spam them with our negative submissions to stop this green lunacy.
Lower speed means MORE emissions not less! Where's the accidents stats and how much of it is related to speeding rather than adverse conditions e.g. ice? The only reason behind this proposal is to make life miserable for Dunedin motorists, just like everything else that this incompetent council does.

A circular argument where the safest speed is 0. As a society we have to balance acceptable risk. It's a fact of life. This should not be left to the hands of a single person/dept. Let's not even get into the issue of compliance.

Just more anti car stupidity.
Do these people actually understand that even in the horse and cart days people were run over. Because no matter how slow you make traffic people will still walk in front of cars trucks and buses. People have been killed riding bikes and scooters without any other vehicle being involved.

Like the weekend genius where we have to remove all bad accident intersections. Well guess what, block bad corners number 1 to 5 just moves other intersections onto the list.

It would be great if government sacked this council today and replaced them with some balanced minded comissioners. Then they could sack the entire planning and roads departments.

and yet Leith Valley road has a speed limit of 100 km allowing the dufus boy racers to high speed right into the night.

Quoting: Due to the high numbers of pedestrians and cyclists using Dunedin’s city centre, speed limits need to be lowered in the central city, the council said in a statement last week. (ends)
Fallacious reasoning. This assumes that the sole reason for pedestrian and cyclist fatalities and accidents ( or something -the term 'using' is extremely vague') is the present speed of cars. Ridiculously simplistic. Pedestrians, cyclists and car users are often the same people using different ravel modes at different times. And what about buses? Should they go slow too?

A ban on cycllists, scooter users and pedestrians using digital media including music and podcasts fed directly into their ears would achieve as much. Distracted driving has been recognised as as cause of drivers' accidents. From observation it also affects other road users by interfering with their awareness of what else is happening around them, such as traffic approaching. Eyes off the road looking down at screens is not the only factor when it comes to accidents.

"In the four-year period 2015-19, 28 people were killed and 369 seriously injured and the statistics were getting worse each year"
Give us the data!!!! Place, time and circumstance.
The spouting off of generic statistic is the hallmark of a manipulative personality and we have had far too much of that from the DCC of late.
The DCC needs to stop treating the public as imbeciles and engage with us rather than their usual elitists tones. They are elected representatives NOT dictators.
GIVE US THE DATA. Show some respect to the ratepayers.

These clowns have to go or the lunacy will never end.

The Council Transport Bureaucracy is like rust... they never sleep. Always scheming for their next act of anti-car idiocy.

A search for "Dunedin pedestrian accident statistics" will bring up some interesting info.
However, as a pedestrian and a motorist who walk's to work from Andy bay to about the exchange I have observed.
Pedestrians crossing at lights when they should not be crossing.
Vehicles, including Go Buses, running a red light on turning left or right when the pedestrian has right of way.
Cyclist's moving through traffic at a red light and stopping on the pedestrian crossing in front of vehicles.
A change in speed limit to 30 kph is not going to change any ones attitude to driving or crossing of the road and may result in an increase in pedestrian stupidity.

We have spent millions of dollars on cycle lanes,footpaths and roads to separate those modes of transport from each other whats wrong with staying within your designated space. This proposal is just more headless chock stuff like the painting of the main street was, but hay we have to spend the latest rate increase so we can put them up again next year.

Another example of dogma driving policy at the DCC. Let us see the actual evidence. Nationally, targeting speed has not shown any improvement in accident statistics. It has raised revenue but that is all. This will be just an inconvenient waste of time with no change to the accident stats.

So far the DCC has failed to provide evidence for any of these ideas. In 20 years of living on the peninsula, I cannot recall any pedestrian casualties; perhaps the DCC can prove otherwise. BTW, what 'townships' on the peninsula? Cyclists; I'm surprised there aren't more accidents considering the bad design of cycleways and poor road sense of cyclists. Benson might do better playing with toy cars and Lego.