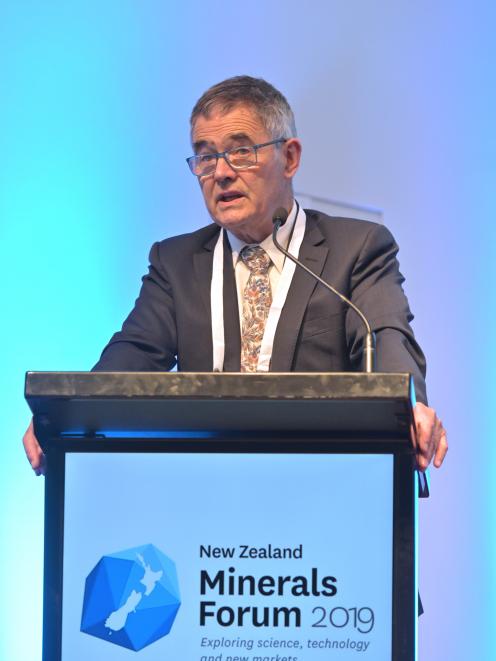 Local Government NZ president Dave Cull, also Mayor of Dunedin, spells out to miners at their annual Minerals Forum conference yesterday the need to take on board community sentiments. Photo: Linda Robertson
The extractive mining industry has to work hard in gaining its ''social licence'' from communities, as the latter demands more action on climate change from big business.

A day earlier in his mayoral opening welcome address, Mr Cull cut the delegates to the quick, saying the ''harmful influences'' on the environment by miners would ''no longer be tolerated''.

His address was more moderated yesterday, but he still made it abundantly clear a transition away from fossil fuels was a must, recounting the historical ''devastating effect'' mining has left on the West Coast, dealing with river acidification from century-old tailings.

He said climate change was now an ''existential threat'' to life, noting many other species before humans have long since been extinct.

''We're just another vulnerable species **** in our own nest,'' he told the more than 100 delegates.

He said it was not just mining, but also dairying and tourism posing challenges for communities.

The build-up of dairy nitrates in southern rivers and streams over 15 years may take up to 40 years to again achieve ''swimmable status'', while the boom in tourism now had communities on edge.

''That [tourism] has led to a perception of loss of social licence ... degrading our lifestyle and standard of living [so] that needs to be curtailed,'' he said.

The ''social licence'' for miners had to take into account ''localism'' and the wishes of the community to get their ''buy-in'' to a project, but based on environmental and social effects and outcomes.

''The community can move mountains, or they can stop them being moved,'' Mr Cull said.

He said central Government had to set standards for councils, highlighting the Resource Management Act did not work as a ''one size fits all'' situation.

He singled out Otago, saying offshore oil and gas deposits may rival those of Taranaki, there were ''substantial'' minerals onshore which were ''under-prospected'', and the West Coast also held ''substantial'' amounts of coal.

Much of New Zealand's perceived wealth lay in fossil fuels, ''but they have to stay in the ground'', Mr Cull said.

While most people described the 21st century as the ''internet age'', Mr Cull said it was really the ''mineral age'' as all the current and developing technologies relied so much on rare earth mineral deposits, through to aspects of much-needed steel production.

On coal, Mr Cull told delegates while industries were not able to ''go cold turkey on fossil fuel'', everyone ''had to get on with transitioning'' efforts now.